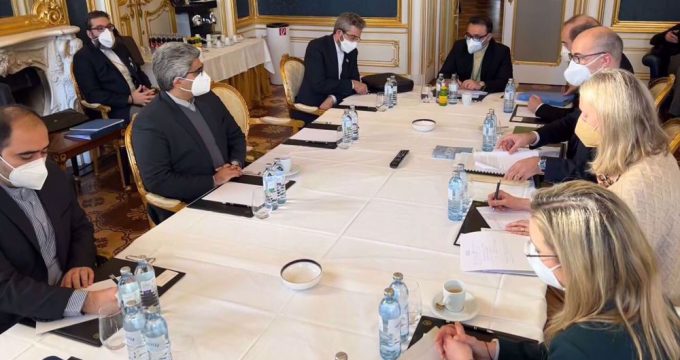 As diplomatic efforts are underway in the Austrian capital Vienna to revive the 2015 agreement, chief negotiators of Iran, the three European parties to the deal (E3) and senior representative of the European Union hold talks about ways to verify the removal of US sanction and guarantee its full commitment to the multilateral deal.

Iran and the remaining participants to the deal, officially known as the Joint Comprehensive Plan of Action (JCPOA), have been holding talks in the Austrian capital since April last year with the aim of reviving the deal by bringing the US into full compliance.

The US left the JCPOA in May 2018 under former President Donald Trump. The Vienna talks began on a promise by Trump’s successor, Joe Biden, to rejoin the deal and repeal the so-called maximum pressure campaign against Iran. Biden, however, has so far failed to undo Trump’s own undoing of Barack Obama’s Iran policy, which led to the JCPOA in June 2015.

In response to the US withdrawal, Iran began to reduce its nuclear commitments under the JCPOA in 2019. Tehran maintains that it will reverse its nuclear measures once the US – the main culprit behind the fragile status of the JCPOA – removes its sanctions and abides by all of its contractual commitments in practice.

Bilateral and multilateral expert-level talks were also held between Iran and the P4+1 group of countries with main focus on the removal of all sanctions the United States imposed on Tehran following its pullout from the JCPOA.

In a post on his Twitter account on Friday, Ulyanov said he held a “very useful” meeting with Bagheri Kani and emphasized that Moscow’s “close coordination” with Tehran plays a key role in continuing and completing the negotiations in Vienna.

Senior representatives of the EU, the US and the P4+1 group of countries also discussed the latest situation pertaining to the removal of anti-Iran sanctions.

The eighth round of the Vienna talks began on December 27 with a focus on the removal of all US sanctions. The US is not allowed to directly attend the talks due to its pullout in 2018 from the deal with Iran.

In a tweet on Saturday, the senior Russian diplomat highlighted the significance of timing in the ongoing Vienna talks but emphasized that it should not be the “major factor which defines an outcome of the negotiations on the future of the JCPOA.”

Ulyanov said timing depends on participants of the Vienna talks, adding that the negotiators must expedite their work if deem necessary.

Timing depends on participants of the #ViennaTalks, doesn’t it? Under the circumstances timing is very important but it shouldn’t be the major factor which defines an outcome of the negotiations on the future of #JCPOA. If necessary the negotiators must expedite their work. https://t.co/QwyI4c6kh6

“Under the circumstances timing is very important but it shouldn’t be the major factor which defines an outcome of the negotiations on the future of #JCPOA,” the Russian lead negotiator wrote.

“Under the circumstances timing is very important but it shouldn’t be the major factor which defines an outcome of the negotiations on the future of #JCPOA,” the Russian lead negotiator wrote.

Ulyanov said on Friday that Russia rejects “artificial deadlines” set by Western parties after their meeting with the US.

“The Western colleagues, as they do it publicly, underlined the need to finalize negotiations ASAP. Russia shares the sense of urgency but is against artificial deadlines,” he tweeted.

The Islamic Republic has also rejected the pessimistic assessment of the talks by the US and the European trio – namely France, Britain, and Germany – as a psychological ploy to win concessions.

On Monday, Iran’s Foreign Ministry dismissed “fabricated deadlines” set by the US and its European allies.

Speaking at a press conference in Tehran, Foreign Ministry spokesman Saeed Khatibzadeh said the US would better focus on its Plan A rather than threatening Iran with a Plan B.

Days earlier, US Secretary of State Antony Blinken had said there were only “a few weeks left” to save the 2015 deal.