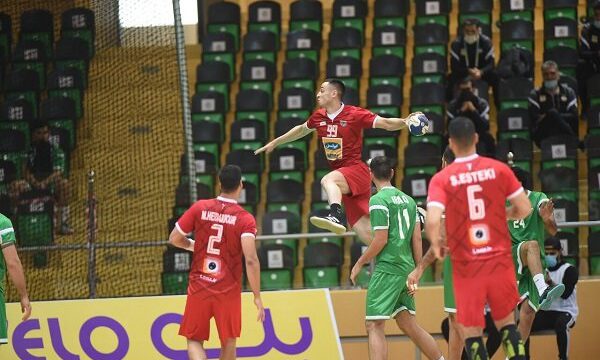 In a close match on Saturday, the Iranian national men’s handball team played its first match in the main round of the Asian Handball Championship, hosted by Saudi Arabia, against Iraq, and could finally defeat its opponent 28-25.

At the beginning of the match, the Iranian handball players led by coach Manuel Montaya Fernandez were able to take control of the game and finished the first half 16 to 12.

The Iraqi side could equalize in the second half, but the Iranian players had a comeback to the game and finished it 28-25.

The championship is being held at the Ministry of Sports Hall in Dammam, Saudi Arabia from Jan. 18 until Jan. 31.

The national handball team of Iran is seeded against Bahrain, Iraq and Kuwait in the main round of the 2022 Asian Men’s Handball Championship.

17 Asian teams are participating in the championships with the top five teams from the Championship will directly qualify for the 2023 World Men’s Handball Championship, to be held jointly by Poland and Sweden.

Saudi Arabia was awarded the tournament after the Championship was moved in September by the Asian Handball Federation due to the spread of COVID-19 in the initial host country, Iran.