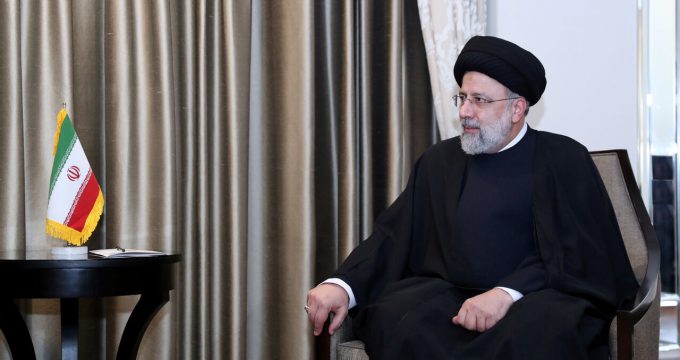 Iranian President Ebrahim Raisi has explained achievements of his talks with Russian officials on expansion of ties in different economic and political fields upon his arrival at Mehrabad Airport.

Early Friday, President Raisi addressed reporters on results of his two-day trip to Russia, saying that the issues discussed in the visit were in line with pursuing macro-objectives of the Islamic Republic of Iran’s foreign policy, including expansion of maximum interaction with other countries especially with friendly and allied ones.
“Expansion of mutual Moscow-Tehran ties will definitely consolidate security in the region and international arena,” he said.
Pointing to consultations on banking and financial affairs between Russia and Iran, the president stated that the two nations can move towards breaking the dominance of dollar on financial and banking affairs, and that they can conduct their exchanges with the use of their national currencies.
Iran’s oil minister has reached good agreements with Russian energy officials on developing oil and gas fields, Raisi added.
The two countries also agreed upon removing obstacles in the way of trade interactions, he said, noting that since the current bilateral trade level is not satisfactory, Moscow and Tehran have reached consensus to increase trade exchanges to 10 billion dollars in the first step.
Russia and Iran have agreed to identify agricultural capacities more precisely in order to boost exchange of agricultural products, the chief executive mentioned.
Both sides also agreed upon operation of north-south corridor with the aim of shortening transit route between Iran and neighboring states in northern borders of the Islamic Republic, he stipulated.
Defense and aerospace collaborations were also among the issued agreed upon, Raisi said, adding that Russian and Iranian sides held talks on foreign policy issues, and that they enjoy common stances and mutual understandings of regional and international developments.
Undoubtedly, Russia-Iran cooperation can help resolve regional and international crises, and upgrade justice, security, peace and stability, he noted, referring to coordination in Syria to uproot terrorist groups in the Arab country.
Expressing hope that all issues raised during his three-hour meeting with Russian President Vladimir Putin will become operational soon, Raisi said that he expects the visit will be a turning point to upgrade relations with the friendly neighboring state.
During the trip to Russia, President Raisi met with some economic actors and chairman of Muslim Council, made a speech at Duma (the State parliament), and was awarded an honorary doctorate by Russia’s state university.
At the end of his trip, the Iranian president participated in a ceremony at Moscow grand mosque, addressing a congregation of Muslims following saying prayers.