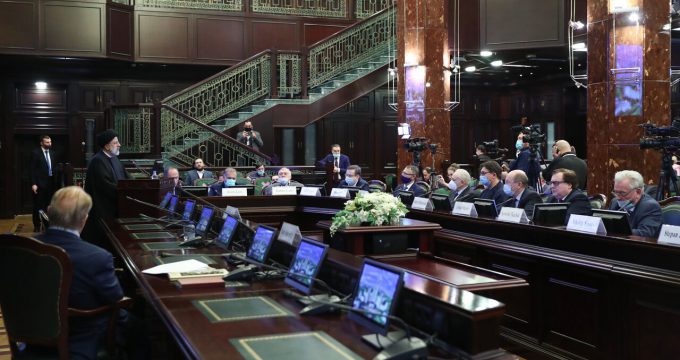 Iran’s President Ebrahim Raisi the elite both in Russia and Iran to try and introduce a pattern for constructive identity-oriented interaction and said they are expected to play their significant and historical role in this regard.

Iranian President Ebrahim Raisi made the remarks while addressing academic council, professors and a group of students at the Moscow State University on Thursday.

Expressing happiness for attending such an outstanding gathering in one of Russia’s oldest and most prestigious universities, he noted that in Islam science and scientific progress is of basic importance which hold religious value at the same time.

He said when scientific progress and achievements lack ethical values, the result will be the bombs which shower on people and kill them or occupies the land of Palestine for seven decades and drives its people out of their homes.

Referring to his numerous meetings with groups of people who represented the economic, scientific, cultural and religious sectors in Russia, he said he is confident now that the two countries enjoy a very capacity for developing bilateral relations.

Saying that the Russian elite and academic community could play a very outstanding role in expanding bilateral scientific diplomacy and enhancing mutual cooperation in new technologies, he highlighted the fact that Iran, despite oppressive sanctions, has managed to accomplish remarkable progress in many scientific fields like commercialization of science in such areas as nano, electricity and electronics, stem cells, laser, medicine and medical equipment, information technology, agriculture and construction.

Any time Iran stood up to try and safeguard its independence and freedom, it saw the United States confronting it, he added, noting that the Iranian academic community, after the revolution which enabled them break away from the American dominance, has been steadily experiencing a remarkable growth while observing the religious valued promoted by holy Islam and relying on their ancient Persian civilization.

He went on to point out that Iran is currently one of the world’s most successful countries in terms of its rising figures of literacy and outstanding academic youths.

Today, humanity faces common issues and challenges. While the West acknowledges that the world is moving towards “non-Westernization”; The United States targets beliefs, national cultures, and ground-breaking traditions rooted in the identity and civilization of independent nations.
The elites of Iran and Russia must provide a model of “interactive and constructive identity” in order to protect both nations from this destructive and reactionary de-identification and to prevent the extinction of foreign culture.
Experience has shown that threats can be turned into opportunities. Cruel sanctions have not only not hindered our scientific growth, but have also led to the development of specialized journals and increased acceleration in the commercialization of technologies in Iran. The number of knowledge-based companies, all of which are rooted in Iranian universities, has reached several thousand, which, while raising standards, has seen a significant growth in the commercialization of science. The share of knowledge-based companies in Iran’s non-oil exports has increased, and in the field of medicine and vaccine production and many other fields, we have achieved an ecosystem and a domestic production cycle.
Achievements of this kind, make us determined to develop our relations in scientific and specialized fields by investing in innovation and commercialization, considering the growing need of the country. Cooperation in the fields of science and technology is a principle for us.
The motivated Iranian young people and professors, as the most important asset of the Islamic Republic of Iran, are ready to cooperate and participate in joint technology and commercialization projects.
The fight against the policies of unilateralism, international discrimination, organized crime, drug trafficking, destabilization of countries and the return of extremism and terrorism will not be possible without the cooperation and coordination of the countries of the region.
There are good relations between the two countries of the Islamic Republic of Iran and the Russian Federation, and both countries are moving towards progress and excellence. Political and security relations and the successful experience of cooperation between the two countries in the fight against terrorism and violent extremism in Syria and coordination to help establish peace and the formation of an inclusive government in Afghanistan, are a good way to develop relations between the two neighbors in other areas.
Good agreements have been reached for the investment and implementation of joint economic projects. The two sides are interested in cooperating in the field of transport and transit by road, rail, sea and air, as well as in the field of energy, including oil, gas, electricity, trade and agriculture. We seek to improve the level of economic cooperation; But we also pay attention to the fact that the basis of all efforts is scientific and research cooperation.
In the face of the discourse that seeks to securities and militaries relations between nations, we follow a school that sees knowledge as the source of power.
Imam Ali (AS) says: “Knowledge is kingship and power. Whoever achieved it won, and whoever did not achieve it was defeated”.
We believe that facilitating the travel of citizens of the two countries, especially intellectuals and academics, and getting more acquainted and informing the elites about the existing capacities in the relations between them, can play a significant role in advancing agreements and developing relations.
Here, I invite you dear university professors and researchers to travel to Iran. The existence of a common historical and civilizational richness is a good platform for the development of scientific and cultural cooperation. Although there is a relative mutual knowledge of the literary celebrities of the two countries and many works have been translated and published, but the atmosphere of cultural cooperation requires that more action be taken in this area.
The teaching of Persian language, which is more than two hundred years old, and also the existence of Iranian-related study centers in Russia and reciprocally the existence of thousands of Iranians graduated from Russian universities, the activities of numerous Russian language teaching centers and Russian studies in Iranian universities and training centers are valuable capacities that should be properly taken advantage of.
Finally, I would like to emphasize that we are now at a turning point in the history of relations between the two countries. University professors, thinkers and study and research centers of the two countries are expected to play their important and historical role in this field, so that the neighboring nations of Iran and Russia, with the most interaction and cooperation in various scientific, cultural and economic fields, can live in well-being and dignity.
I wish peace, prosperity and well-being to the government and people of Russia and success to all of you!
At the end of the ceremony, Raisi was awarded an honorary doctorate by the Moscow State University.