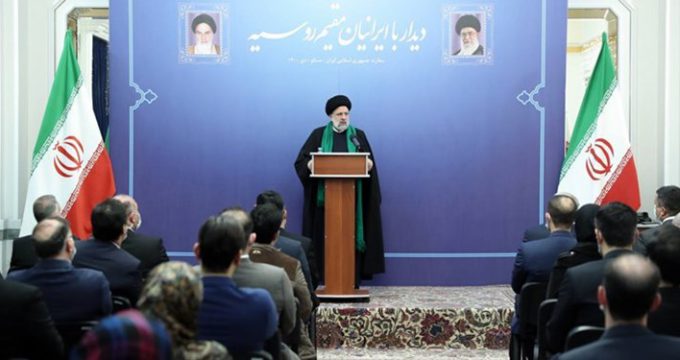 Iranian President Raisi underlined the need for boosting the country’s exports to Russia and further expansion of trade and economic ties.

Addressing the Iranian traders residing in Russia, President Raisi stressed the need to reduce barriers to issuing export licenses, saying that Iran’s share in the Russian market can definitely be improved.

After a three-hour meeting with Russian President Vladimir Putin on Wednesday, President Raisi delivered a speech in a ceremony held in the presence of the Iranian traders residing in Russia.

Travel for Iranian citizens and students abroad should be facilitated and their problems should be resolved, he said in this ceremony, calling on the Ministry of Health and Medical Education and Ministry of Science, Research and Technology to address the problems of the Iranian students.

All Iranians in any part of the world should do their best to achieve growth and development for their country, he also said, adding, “Great Iranian men and women in the fields of science, culture, and art, as well as the Resistance, made history that we can be proud of.”

“If we want to introduce the hero of the fight against terrorism to the world, Lieutenant General Qassem Soleimani is the figure that we would name,” President Rayeesi stressed.

Elsewhere in his remarks, he referred to his meeting with Putin, saying that common issues in the fields of economy, the strong role of Iran and Russia in the region, and the development of relations were discussed in the meeting.

“Statistics show that due to the efforts of Iranian businessmen and officials, Iran’s exports to other countries have increased in recent months”, he underscored.

President Rayeesi arrived in Moscow on Wednesday to discuss economic and trade cooperation with his Russian counterpart Vladimir Putin in Kremlin.

Iran-Russia relations, Iran-Russia trade, Raisi's visit to Russia January 20, 2022
Iran-Russia coop. in Syria strengthened regional security
Russia and Iran put on a show of unity against the US