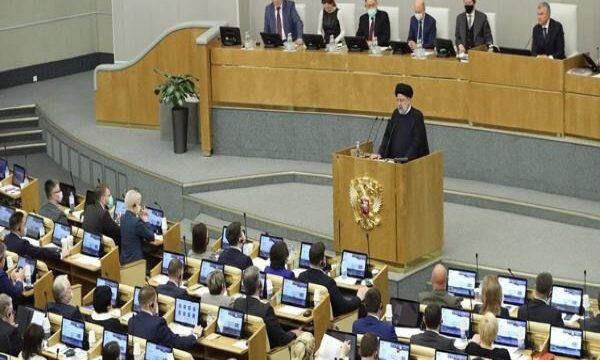 the successful model of Iran-Russia cooperation in Syria guaranteed the independence of countries and strengthened regional security, the Iranian president said in the Russian Duma session on Thursday.

cooperation with his Russian counterpart Vladimir Putin in Kremlin.

Attending the State Duma of the Russian Federation on the second day of his visit to Moscow, the Iranian President delivered a speech for Duma members.

In the beginning, the Iranian President expressed satisfaction on attending the State Duma and meeting with the representatives of the civilized people of Russia.

The Iranian president said, “We believe that the relations between Tehran and Moscow should be designed in such a way that they would be away from the interference of third parties and provide mutual benefits for nations.”

He went on to say that today, fortunately, a bright future is being witnessed regarding cooperation between Iran and Russia at bilateral, regional, and international levels.

Strengthening Iran-Russia relations in bilateral and multilateral forms will boost the economies of the two nations and strengthen regional and international security, he said.

The abundant economic and trade capacities of the two countries, along with the power and influence of the two sides in their geographical areas, can strengthen the convergence in the regions, he also noted.

The Islamic Republic of Iran seeks maximum interaction with all countries of the world, especially its allies and neighboring countries, he said adding that the mutual interests of nations and formation of a “civilized global community” are the purpose and basis of this cooperation and interaction.

He also spoke about the role of Resistance in defeating the global arrogance, saying, “The successful model of Iran-Russia cooperation was in line with the resistance of the Syrian people and government, guaranteeing the independence of countries and strengthening regional security.”

He also expressed hope that Tehran-Moscow cooperation will lead to the promotion of relations, the establishment of peace and stability in the region.