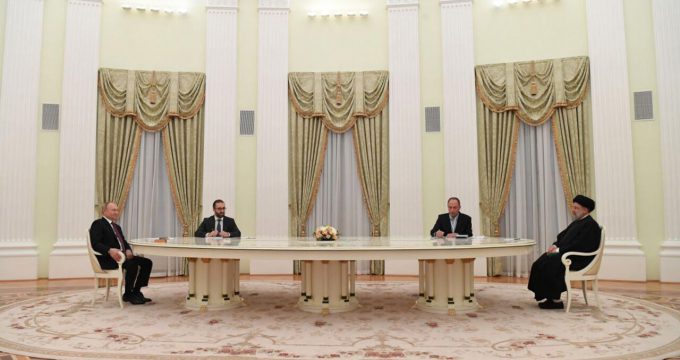 No hindrance in way of improvement of Iran-Russia ties: Pres. Raisi tells Putin in Moscow

Meeting with Russian President Vladimir Putin in Moscow during his first visit to Russia as Iranian president, Ebrahim Raisi says there is no hindrance lying in the way of improvement of relations between the Islamic Republic and the Russian Federation.

“We have no limitation for expansion and development of ties with Russia and are after establishment of strategic relations with Moscow,” the Iranian president said during the meeting on Wednesday.

The Islamic Republic has already signed a strategic partnership treaty with China that has outlined the roadmap for the Sino-Iranian ties for a 20-year-long term. And, right ahead of Raisi’s visit to the Russian capital, Foreign Minister Hossein Amir-Abdollahian said that the new administration in Tehran followed a “new road map” to deepen ties with Moscow, adding that Iran and Russia were determined to update a 20-year cooperation treaty that they signed in 2001.

Adding to his remarks, Raisi said, “Documents of strategic cooperation can outline the horizon of the [countries’] relations over 20 years.” “We are after increasing the volume of commercial ties with Russia and will expend much effort in this area,” he noted.

Raisi hailed the countries’ anti-terror efforts in support of Syria as “good [common] experience that can serve as a basis for the [Russo-Iranian] relations.”

‘Sanctions can’t come in the way of Iran’s progress’

The Iranian president, meanwhile, said Tehran was in the midst of efforts aimed at removing the United States’ illegal and unilateral sanctions against the country.

“We hope that [these efforts] would lead to removal of the sanctions,” he said, adding, however, that “the threat of sanctions cannot come in the way of Iran’s progress.”

Putin, for his part, expressed delight to meet his Iranian counterpart, hailing that the two sides have been in constant communication since Raisi’s inauguration last year.

He acknowledged Tehran and Moscow’s contribution to Syria’s “transition past the terrorist threats.”