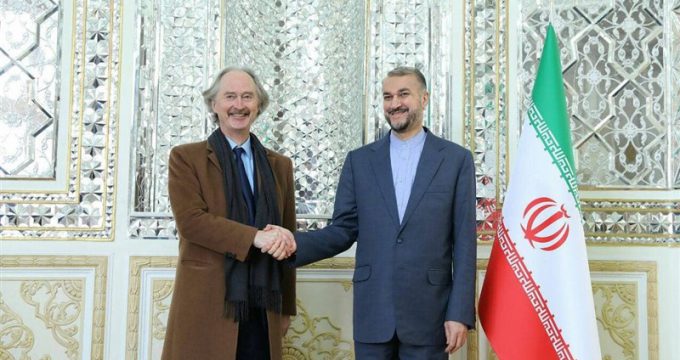 US, Israel preventing Syria from returning to normal: Iran FM

Iranian Foreign Minister Hossein Amir-Abdollahian has warned that the US military presence and Israeli strikes in Syria are hindering a political solution to the crisis gripping the Arab country, calling on the United Nations to act against such unlawful activities.

In a meeting with visiting United Nations Special Envoy for Syria Geir Pedersen in Tehran on Sunday, Amir-Abdollahian hailed the Norwegian diplomat’s efforts to promote national dialog, peace and stability in Syria, and underlined that the Islamic Republic has greatly contributed to such attempts.

The Iranian foreign minister also reiterated Tehran’s stance on the settlement of the Syrian crisis through political approaches and said his country views the UN as the body responsible to help put a peaceful end to the conflict in the Arab nation.

Amir-Abdollahian criticized the illegal presence of US occupation forces in Syria as well as Israeli airstrike on the war-ravaged country, stating that such practices derail the political settlement process.

He called on the international community and the United Nations to take effective measures in this regard.