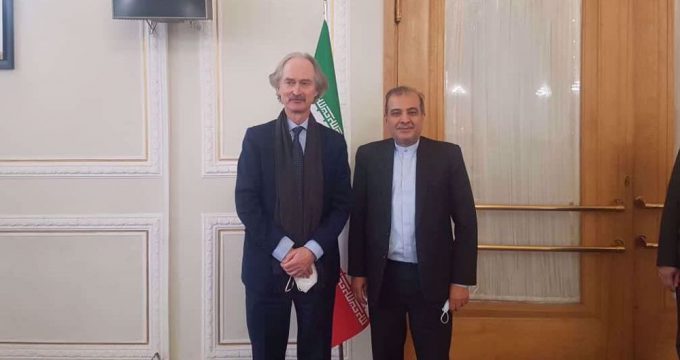 An Iranian diplomat voiced the country’s support for the United Nation’s plans to ensure peace and stability in Syria and protect the Arab country’s sovereignty.

In a Saturday meeting in Tehran, Ali Asghar Khaji, a senior adviser on political affairs to the Iranian foreign minister, and Geir Pedersen, the United Nations special envoy for Syria, exchanged views about the latest developments pertaining to the ongoing crisis in the Arab state, discussions about the Constitutional Committee and ways to counter sanctions and dispatch humanitarian aid to the Syrian people.

“The Syrian government and nation have stood up to Daesh and other terrorist groups for more than 10 years and have now achieved relative stability, and the country’s relations with regional states are increasing,” Khaji said.

The Iranian diplomat called on the United Nations and other regional and international bodies to “pay attention to the current situation of the Syrian government and people and to step up their efforts to remove sanctions, provide aid to the (Syrian) people, (help) repatriation of the refugees and begin rebuilding the country.”

The UN envoy, who is in Tehran at the head of a delegation, hailed Iran’s efforts to promote cooperation with the UN in the Astana format negotiations to resolve the crisis in Syria through diplomatic channels and called for the continuation of such interaction, Press TV reported.