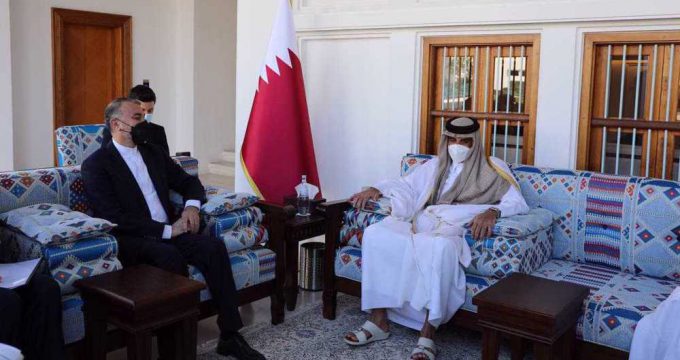 Amir-Abdollahian arrived in Doha on the second leg of his regional tour after wrapping up a visit to the Omani capital of Muscat and met with Qatari Emir Sheikh Tamim bin Hamad Al Thani on Tuesday.

During the meeting, the foreign minister conveyed warm greetings of President Ebrahim Raeisi to the Qatari emir and elaborated on the latest developments in mutual relations in various political, security, trade and economic fields.

He stressed the importance of broadening cooperation in the economic sector.

Amir-Abdollahian also reaffirmed the Iranian administration’s policy of expanding ties with neighboring countries and said Tehran and Qatar should exchange high-level delegations for consultations to that effect.

The two sides also discussed the talks in Vienna on the removal of US sanctions against Iran and the crises in Afghanistan and Yemen.

The Qatari emir, for his part, pointed to the significance of Tehran-Doha relations, particularly on regional issues, and said his country was keen to strengthen cooperation.