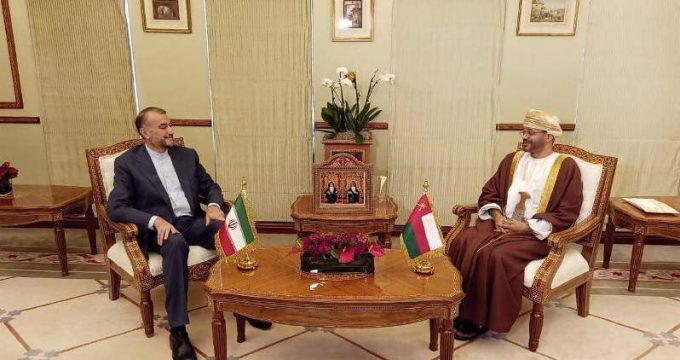 Iranian Foreign Minister Hossein Amirabdollahian who is in Muscat, Oman, said on Monday in a meeting with his Omani counterpart that the two nations’ cultural relations have roots in history, and the two countries have managed to build strong and deep-rooted cooperation based on it.

The Iranian foreign minister who is in Muscat to meet the Omani officials also met and conferred with his Omani counterpart Sayyid Badr Albusaidi on issues of mutual interest.

The Iranian foreign minister in the meeting expressed satisfaction for the excellent and ever-expanding Tehran-Muscat bilateral relations and emphasized on the need for continuous meetings between the two countries political, economic, and cultural officials and the activation of specialized joint committees, including the economic committee, to further boost bilateral ties.

He, meanwhile, congratulated the 50th anniversary of Iran-Oman diplomatic ties and appreciated Muscat’s peaceful approach towards resolving the regional crises through diplomatic disputes, which he said is the only logical way.

Amirabdollahian also expressed satisfaction over the expansion of bilateral economic ties, which he said contributes to boosting regional peace and stability.

The Omani Foreign Minister Sayyid Badr Albusaidi, too, in the meeting referred to Iran’s capacities, capabilities and human resources which can be used in improvement of comprehensive bilateral cooperation, including in the economic field.

Both sides were agreed in the meeting on the need for continuous bilateral consultations on major regional developments.