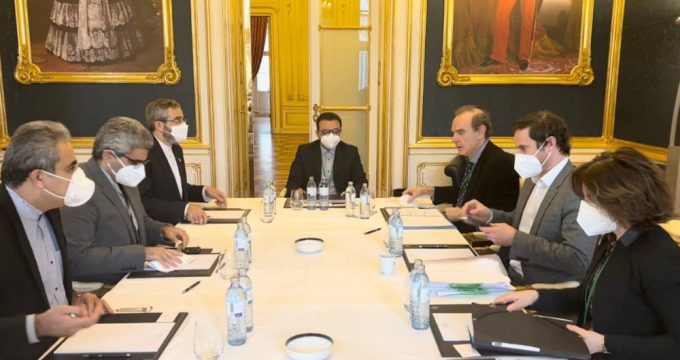 Iran and the five remaining parties to the 2015 deal have continued intensive diplomatic talks in the Austrian capital aimed at securing the removal of all sanctions that the United States imposed on Tehran following the former’s unilateral withdrawal from the agreement three years after its conclusion.

On Monday, Iran’s lead negotiator to the Vienna talks Ali Bagheri Kani and Enrique Mora, the European Union’s deputy foreign policy chief and head of the Joint Commission of the nuclear deal, officially known as the Joint Comprehensive Plan of Action (JCPOA), as well as representatives of the three European signatories to the agreement held separate meetings.

Bagheri Kani, who also serves as Iran’s deputy foreign minister for political affairs, began his Monday talks with a meeting with the Russian chief negotiator and ambassador to international organizations in Vienna, Mikhail Ulyanov.

He also held talks with lead negotiators of China.

Iran and the P4+1 group of countries – Britain, France, Germany, Russia and China – resumed talks in Vienna on January 3 after the parties took a three-day break for the New Year. The US is not allowed to directly attend the talks due to its pullout in 2018 from the landmark deal with Iran.

The eighth round of the Vienna talks began on December 27 with a focus on the removal of all sanctions that the United States imposed on Iran.

During the previous round of the talks, the first under Iran’s new President Ebrahim Raeisi, Iran presented new proposals at the negotiating table to help the talks move forward and later criticized the European signatories of the JCPOA for failing to follow suit and remaining passive.

One year after Washington’s exit from the deal and the failure of the European signatories to uphold their commitments under pressure from the US, Iran took a set of retaliatory steps away from the deal in several stages in line with its legal contractual rights.

With a new administration in office in the US, Washington says it wants to rejoin the deal, but it has been dragging its feet in removing the sanctions on Iran.

Tehran has been firmly insisting that the US must first remove the sanctions in a verifiable manner, give guarantees that it will not leave the agreement again, and compensate for all the damages inflicted on Iran due to Washington’s unlawful pullout.

Speaking in a televised interview whose text was published on Sunday, Iran’s Foreign Minister Hossein Amir-Abdollahian said it is possible for negotiating parties in the Austrian capital to reach a good agreement in the shortest possible time if there is serious will on all sides.