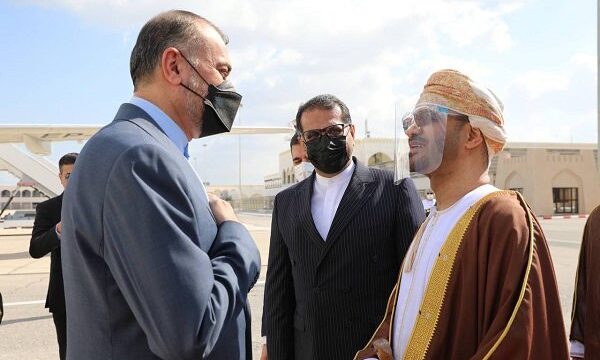 Stating that Tehran-Muscat relations are long-standing and stable, the Iranian Foreign Minister said that Iran is seeking to strengthen relations with the Persian Gulf states considering the new administration’s policy.

Upon his arrival at the Omani capital of Muscat on Monday, Hossein Amir-Abdollahian described Tehran and Muscat relations as long-standing and stable.

Iran is willing to promote political and cultural cooperation with Oman to a higher level of economic and trade cooperation, said the Iranian Foreign Minister.

“During the visit, we will have talks with high-ranking Omani officials and the Minister of Foreign Affairs on the development of bilateral relations and some regional and international issues,” he added.

Referring to the quadripartite agreement on the revival of the transit line, Amir-Abdollahian said that the agreement was signed by four countries: Iran, Oman, Turkmenistan and Uzbekistan.

Given the 13th government’s view on neighborhood policy and the good changes that have happened in recent months in Iran’s relations with its northern neighbors, the country seeks to further strengthen and develop cooperation with the Persian Gulf countries, the Iranian senior diplomat noted.

Heading a political delegation, Amir-Abdollahian left for the Omani capital of Muscat on Monday morning to hold talks with the country’s official on the expansion of relations between the two countries in various political, economic, and cultural fields, as well as consulting on important issues in the region.