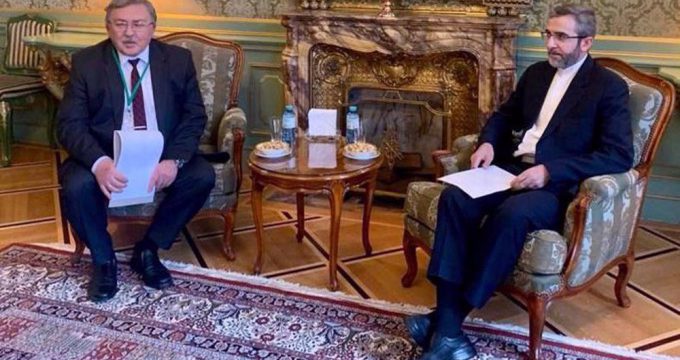 ran and the remaining signatories to the 2015 deal are continuing their diplomatic efforts in the Austrian capital of Vienna aimed at securing a removal of the United States sanctions on Tehran and reviving the agreement that was abandoned by Washington.

Lead negotiators of Iran and the five parties to the nuclear deal, officially known as the Joint Comprehensive Plan of Action (JCPOA), held bilateral meetings on the second leg of the eighth round of the Vienna negotiations.

The Russian ambassador to international organizations in Vienna, Mikhail Ulyanov, said in a tweet that he met with Iran’s chief negotiator Ali Bagheri Kani on Tuesday.

“We discussed the main unresolved issues which need to be settled in the course of the #ViennaTalks,” the senior Russian diplomat said in a post on his Twitter account.

Met today with the Head of the Iranian delegation Dr. A. Bagheri Kani . We discussed the main unresolved issues which need to be settled in the course of the #ViennaTalks. pic.twitter.com/NIzfndqPli

In another tweet, Ulyanov said in talks with Enrique Mora, the European Union’s deputy foreign policy chief and head of the JCPOA Joint Commission, they “exchanged views on the current state of affairs and possible way ahead.”

Met today with the #EU Coordinator at the #ViennaTalks Mr. Enrique Mora. We exchanged views on the current state of affairs and possible way ahead. pic.twitter.com/N2tmyzx0Ww

Iran and the five remaining signatories to the JCPOA — Britain, France, Germany, Russia and China — resumed talks in Vienna on Monday after the parties took a three-day break for the New Year.