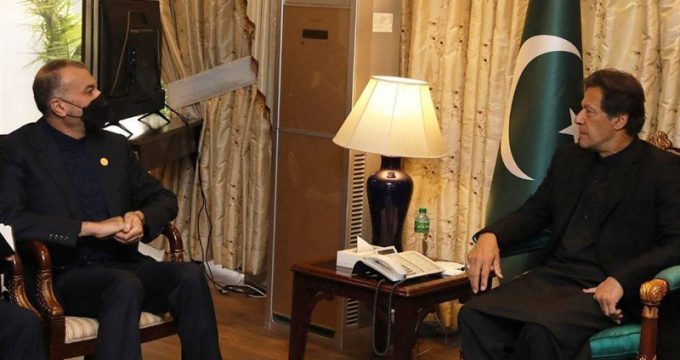 Prime Minister of Pakistan Imran Khan spotlighted the significant role that Iran plays in ensuring peace in the region and in Afghanistan, calling for the promotion of cooperation between Islamabad and Tehran in various fields.

In a meeting with Iranian Foreign Minister Hossein Amirabdollahian, held on the sidelines of an emergency session of the Organization of Islamic Cooperation (OIC) in Islamabad on Sunday, the Pakistani prime minister said Iran plays an important role in the region and in the establishment of peace and stability in Afghanistan.

He also voiced Pakistan’s support for the formation of an inclusive government in Afghanistan, stressing the need to help the Afghan people considering a shortage of foodstuff and fuel in the wintertime.

Khan called for the promotion of cooperation between Pakistan and Iran in various fields, especially the expansion of border trade and establishment of border markets.

For his part, the Iranian foreign minister congratulated Pakistan on hosting the extraordinary ministerial meeting of the OIC, and emphasized the necessity of collective cooperation on the delivery of humanitarian aid to Afghanistan.