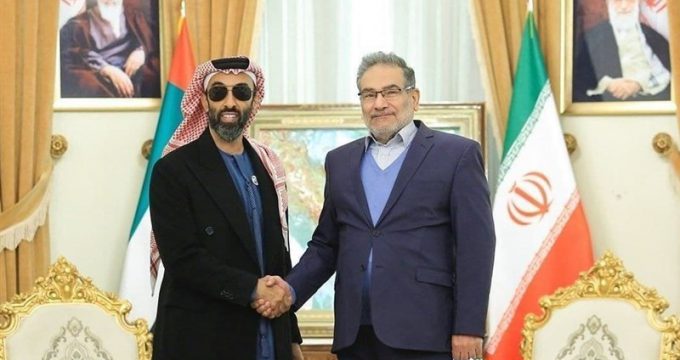 Secretary of Iran’s Supreme National Security Council Ali Shamkhani called for the settlement of regional disputes through dialogue instead of military approaches, urging that the relations among regional states should not be influenced by extra-regional actors.

In a meeting with the United Arab Emirates’ national security adviser Sheikh Tahnoun bin Zayed Al Nahyan, held in Tehran on Monday, Shamkhani emphasized that regional stability and security will be ensured only through constant negotiations and cooperation among regional countries.

The relations among regional states should by no means be affected by the interventionist policies of extra-regional states, the Iranian official added.

“Warm and friendly relations with neighbors as well as exchange of economic, trade and investment capacities are the Islamic Republic of Iran’s main foreign policy priorities,” he underlined.

Shamkhani noted that collective cooperation among the Persian Gulf countries would contribute to development and welfare and help the nations to play a major role in the regional and international economy as the hub of energy.

Calling for joint efforts to end the military and security crises that have engulfed regional Muslim nations, the Iranian official said, “Dialogue and understanding must replace military approaches to the settlement of disputes.”

He expressed hope that the Emirati official’s visit to Tehran would usher in a new era of relations between the two neighbors.