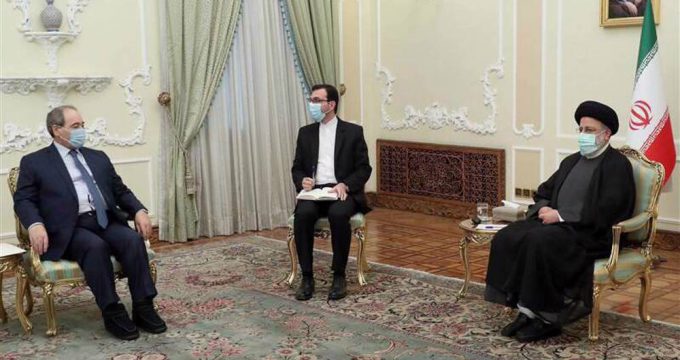 Iran’s President Ebrahim Raeisi says continued presence of foreign forces in Syria and elsewhere in the West Asia region is detrimental to security and stability of the entire region.

Raeisi made the remarks in a meeting with visiting Syrian Foreign Minister Faisal Mekdad in Tehran on Monday, during which the two sides discussed regional and international developments as well as ways for all-out expansion of relations between Tehran and Damascus.

“Continuation of the illegal presence of foreign forces in the region and on the Syrian soil is detrimental to security and stability of the region,” Iran’s president said.

“Daesh [terrorist group] was created by Americans and today, presence of both Daesh and America at any place in the region will be a great threat to security, stability and welfare of [regional] nations,” Raeisi added.

Underlining the significance of maintaining the security and stability of Syria as well as its powerful presence in regional equations, Raeisi noted, “Today, Syria, with its anti-Zionist policy, is at the forefront of resistance against the Zionists, and history will proudly record the commendable resistance of the Syrian people and government in the face of cowardly acts of aggression.”