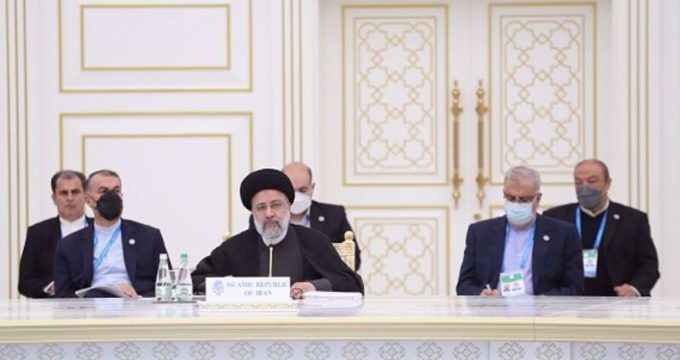 President Ebrahim Raisi has assured Iran’s neighbors that US sanctions will have no bearing on regional cooperation and interaction.

Raisi, who is in Turkmenistan’s capital Ashghabat to attend a summit of the Economic Cooperation Organization, called on member states to work together in a range of fields, from the creation of a regional electricity market, to water transfer projects as well as energy ventures.

He said Iran is ready to help connect the fiber optic networks of member states as well as promote artificial intelligence projects and virtual education programs.

President Raisi also proposed that the organization create an internal financial mechanism to boost its efficacy.

He said closer cooperation among the member states will help boost the efficiency of the Asian politico-economic organization.

“In addition to enjoying material features of power such as a population of half a billion, the ownership of one third of the world’s energy resources, a unique position…, and young and powerful human resources, the ECO has a privileged identity called Islam,” he said.

Over the years, he added, good progress has been made in ECO, but there is still a significant gap between the achievements and the real capacities and capabilities of the organization.

He stressed that Iran, as an influential country, seeks to improve the level of cooperation within the ECO and raise the status of the organization in international interactions.

“The Islamic Republic gives special priority to economic cooperation and partnership with Asian countries, especially its neighbors in West Asia, Central Asia and the Caucasus,” he added.

“Many economic openings in ECO depend on the promotion of intra-regional trade. Iran is ready to play a greater role in trade liberalization in ECO and contribute to achieving this important goal by granting appropriate preferential tariffs,” the president said.