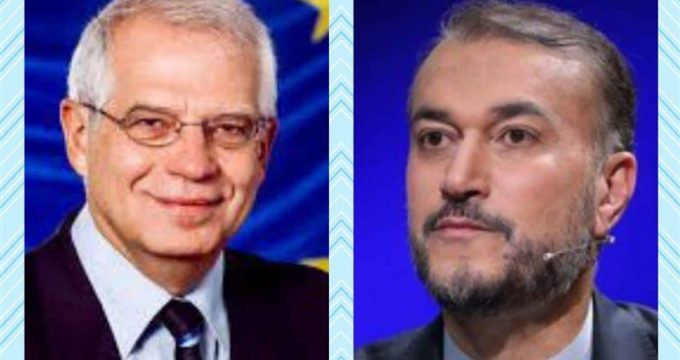 Amirabdollahian told Borrell that a good, even quick agreement was possible if other parties were ready to return to their full commitments and removing sanctions against Iran.

Although the US and three European countries reneged on the JCPOA, Iran would attend the talks in Vienna, Austria with good faith and seeks a good, verifiable agreement, the Iranian top diplomat said, adding that rejoining the deal should constitute compliance to all of its provisions and content in action.

He thanked Borrell for his efforts as the coordinator of the deal and said that Iran’s negotiating team would consider all the issues that should be settled, as it was clear that no final outcome was achieved after six rounds of talks held in Vienna earlier this year.

They should be serious, sufficient assurances that the untrustworthy US wouldn’t withdraw from the potential deal once again, Amirabdollahian noted.

Pointing to contradictory behavior shown by the US and inconsistencies between their words and actions, the foreign minister said that the White House has slapped new sanctions against Iranian entities and individuals, while announcing readiness to rejoin the JCPOA.

People should see a serious determination and actions to remove all sanctions against Iran, he said, adding that the West should attend the upcoming talks with a new and constructive approach.

During the phone conversation, Borrell pointed to his contacts with all participants of the JCPOA as the coordinator of joint commission of the JCPOA and said that there should be intensive, detailed discussions on the deferred issues and removing of sanctions.

Borrell said that there was the possibility that all the participants could return to the original form of the JCPOA.

He said that the only way to remove sanctions was the revival of the JCPOA and thus Iran could reclaim its rights and the world could become assured about the peaceful nature of Iran’s nuclear program.

Borrell said that he hoped all parties would enter the talks in Vienna with a positive, pragmatic approach and a strong determination to discuss the unsolved issues.