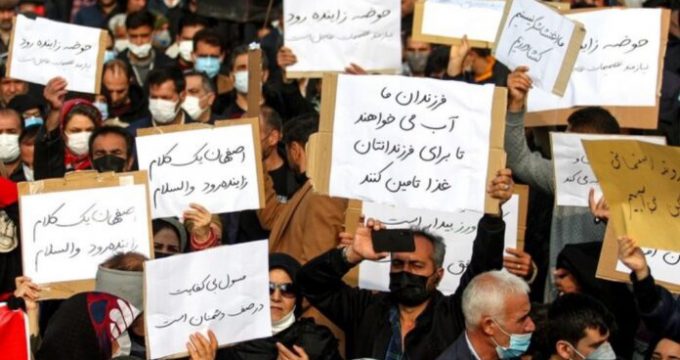 Thousands of people, including farmers, have protested against actions resulting in a major river drying up in Iran’s central city of Isfahan, calling on authorities to open a dam to relieve drought-stricken areas.

The protesters on Friday gathered on the banks and barren riverbed of the Zayandeh Rud River, which has lost almost all its water in recent years.

The demonstrators were critical of dam construction and the development of water-intensive industries and blamed the re-distribution of the key river’s water to other cities for its arid state.

First Vice President Mohammad Mokhber ordered energy and agriculture ministers to take immediate measures to tackle the issue of the river’s drainage in three provinces of Chaharmahal and Bakhtiari, Isfahan and Yazd.

He said he has ordered the two ministers to draw up strategies and manage the issue “so that we will be able to go through this difficult period.” He emphasized that the Iranian administration is firmly determined to solve the problem of people in the three provinces, particularly in Isfahan, through all possible means.

Officials involved would meet on Saturday and the outcome of the discussions would be announced, Mokhber said, noting that the ministers have reviewed many plans and offered proposals which would be implemented when finalized.

Earlier, Iranian President Ebrahim Raeisi stressed the importance of taking the issue of water management in the country seriously, saying many problems can be resolved through an optimal use of climate capacities, IRNA reported.

Energy Minister Ali Akbar Mehrabian apologized to farmers in Isfahan for failing to provide necessary water for their crops. “We hope to fill these gaps in the coming months,” he said.

With a population of around two million, Isfahan is Iran’s third largest city and a magnet for tourism given its heritage sites, including a historic bridge that crosses the Zayandeh Rud River.