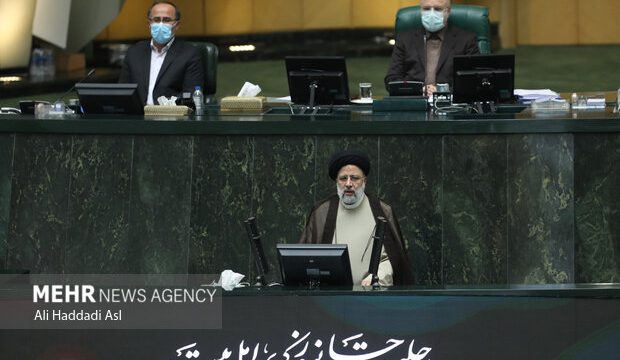 Iranian President Ebrahim Raisi said that having active diplomacy and holding relations with neighbors are priorities of the Iranian government.

Speaking on Tuesday during a parliament session held to review the qualifications of the proposed Minister of Education, the Iranian President pointed to the measures taken in the field of widespread vaccination and facilitating public access to medicine and COVID-19 treatment after taking office.

“83 days have passed since the beginning of the government, and with all the financial problems, the government payments, especially the payment of employees’ salaries, have been made without delay and without borrowing from the central bank,” Raisi said.

He added that providing 100 million doses of vaccines to protect people’s lives was a positive step.

Good steps are being taken in relation to economic issues, Raisi said, adding that selling oil and increasing revenues and financial resources are also on a positive track.

Elsewhere in his remarks, the President pointed to foreign policies of his administration, saying, “Today, the country’s diplomacy and international interactions, based on mutual respect and the principles of dignity, wisdom and expediency, have come out of the passive state and become active”.

According to the Iranian President, having active diplomacy and holding relations with neighbors is a  priority in foreign policies of the Iranian government.