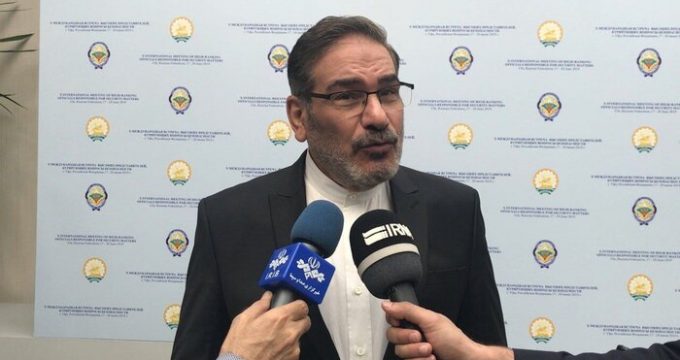 Secretary of Iran’s Supreme National Security Council (SNSC) Ali Shamkhani said that there should be a collective endeavor to form an inclusive government in Afghanistan and counter the humanitarian crisis in the country and that Iran was ready to help in this regard.

Speaking in the 3rd Regional Security Dialogue on Afghanistan held in New Delhi, India, on Wednesday, Shamkhani reminded that the first and second editions of the meeting were held in Tehran and issues like terrorism, development, and repairing damages inflicted by the US and the West were covered there.

Shamkhani said that holding three rounds of talks between national security council chairs of Afghanistan’s neighboring countries before the US withdrawal from Afghanistan was indicative of the neighbors’ true understanding, but the US miscalculated once again.

He highlighted Iran’s three concerns on the current situation in Afghanistan, naming interference of some countries in transferring terrorist agents to Afghanistan, expansion of poverty and humanitarian crisis, and the immigration crisis that necessitates aids for Afghan people to be able to stay in their own country.

Iran’s SNSC secretary also said that the countries participating in the meeting had several tasks to do, including holding those responsible for the current situation in Afghanistan accountable, making collective endeavor to form an all-inclusive government, and countering humanitarian crisis in Afghanistan.

Pressuring the US to release Afghan funds abroad, fighting against terrorism in Afghanistan, and helping solve the immigration crisis were among other tasks, according to the official.