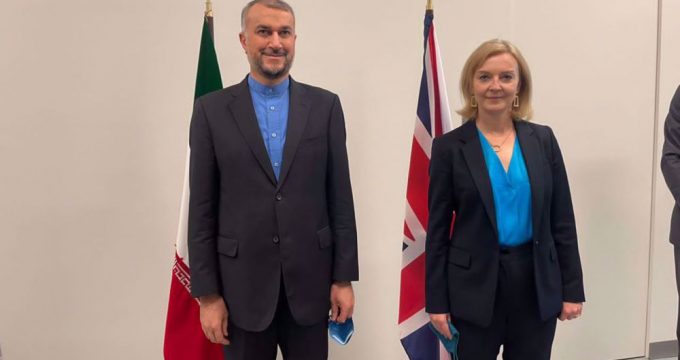 In a telephone conversation on Monday, Amirabdollahian and UK Foreign Secretary Liz Truss talked about various issues, including Tehran-London relations, the Vienna talks on the revival of the 2015 nuclear deal, and regional developments.

Pointing to the UK’s outstanding debt to Iran that dates back to the past decades, Amirabdollahian said it is the Iranian nation’s right to reclaim that money and stressed the need for London to act immediately in order to pay off the debt as soon as possible.

He also noted that most of the trade agreements between Iran and the UK, struck after the JCPOA, have not been implemented, calling on London to step up efforts to promote trade and facilitate financial interaction with Tehran.

Holding the US responsible for the current circumstances after its withdrawal from the JCPOA, the Iranian foreign minister said certain parties are also to blame for aggravating the situation with their irresponsibility and silence on the US’ measures.

The Vienna talks on the revival of the JCPOA will meet with success if all of the sanctions on Iran are lifted, all parties return to their commitments, the necessary guarantees are given that the results of the negotiations will be carried out, and the other side’s measures are verifiable, Amirabdollahian stated.