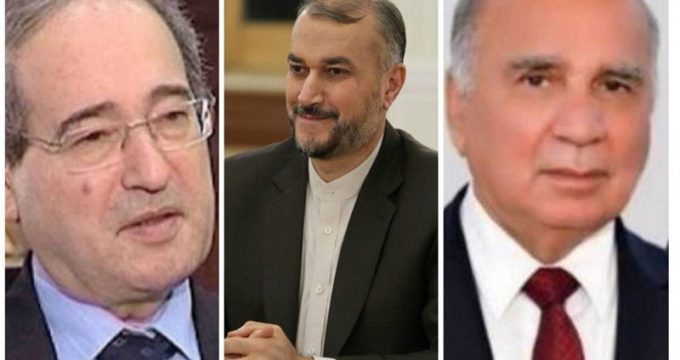 In telephone conversations with his Iraqi and Syrian counterparts, Iranian Foreign Minister Hossein Amirabdollahian talked about the bilateral relations and the latest developments in the region.

On Thursday, Iraqi Foreign Ministers Fuad Hussein and Syria’s Faisal Mekdad called Iran’s top diplomat to greet him after he was diagnosed with the coronavirus.

The senior Iraqi and Syrian diplomats also discussed the issues of mutual interest, the bilateral relations with Iran, and the latest regional developments.

The Iraqi foreign minister briefed Amirabdollahian on the latest developments regarding the formation of his country’s new government.

Foreign Minister Mekdad also gave Amirabdollahian an update on the developments in Syria and its people’s resistance.

Apart from the phone calls from the top Syrian and Iraqi diplomats, the foreign ministers of China, Kuwait, Jordan and a number of foreign ambassadors in Tehran sent separate messages to Hossein Amirabdollahian and wished him health and a speedy recovery.