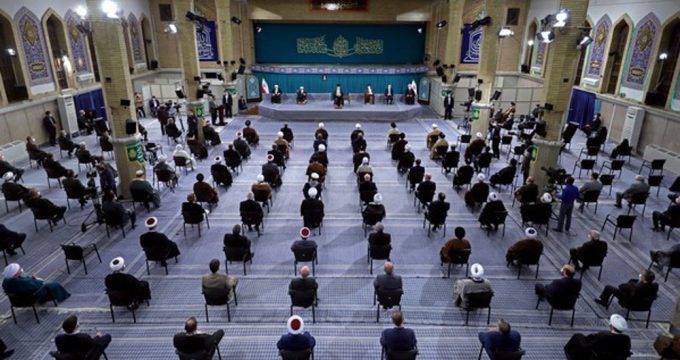 Leader of the Islamic Revolution Ayatollah Seyyed Ali Khamenei says the unity of Muslims is a “definite duty and a Qur’anic order”, adding some regional governments’ decision to normalize ties with Israel is a “great sin and mistake”.

“These governments must return from this path which is against the Islamic unity and make amends,” the Leader told Iranian officials and foreign participants at the 35th International Islamic Unity Conference in Tehran on Sunday.

The annual conference held on the birth anniversary of Prophet Muhammad (Peace upon Him) brings together Shia and Sunni scholars, intellectuals, researchers and professors from around the world, with the Leader saying Sunday that they have a duty to explain and promote the “comprehensive of Islam in all matters of life”.

Ayatollah Khamenei said the reason for his repeated emphasis on the issue of unity is the big schism which exists among religions, with the enemies striving seriously to widen it.

“You see that the issue of being a Sunni or a Shia has entered the American political literature for several years, while they are against the quintessence of Islam and hostile to it,” the Leader said.

Ayatollah Khamenei touched on the US campaign to stoke sedition among Islamic countries with the help of its proxies.

“The recent unfortunate and distressing explosions at mosques targeting Muslim worshipers in Afghanistan are among such incidents that were carried out by Daesh,” the Leader said.

“Who is Daesh? Daesh is the same outfit that the Americans — the same Democratic group of the United States — explicitly said ‘we created’, even though they are not saying it anymore and deny it.”

Ayatollah Khameni said one of the ways to prevent such incidents is for the current Afghan officials to attend Shia centers and mosques and encourage Sunni Muslims to participate in inter-religious congregations.

“It is not possible to achieve the important goal of creating a new Islamic civilization without the unity of Shias and Sunnis,” the Leader said.

“The Islamic unity is a matter of principle, not a tactical issue for special occasions,” he said, adding that unity among Muslims will create synergy and strengthen them and their hand in interacting with non-Islamic countries.

“The main yardstick for the unity of Muslims is the issue of Palestine. The more seriousness is shown on the restoration of the rights of the Palestinians, the stronger the Islamic unity will be,” the Leader said.