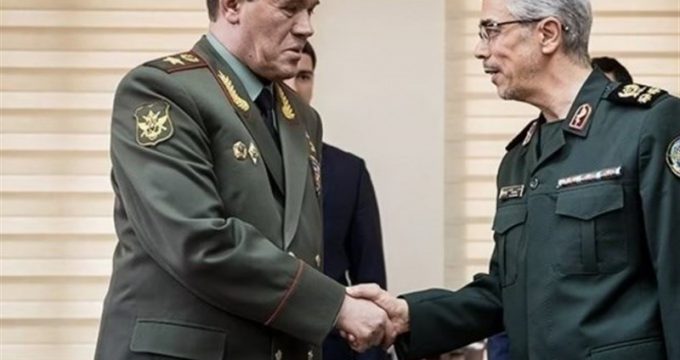 Ranking commanders from Iran and Russia discussed ways to enhance military cooperation between the two countries.

Chief of Staff of the Iranian Armed Forces Major General Mohammad Hossein Baqeri, who is in Moscow for an official visit, held a meeting with Chief of the General Staff of the Armed Forces of Russia Valery Gerasimov on Monday.

Describing Iran as a “close partner of Russia”, General Gerasimov said Moscow and Tehran continue to expand relations in a friendly atmosphere and their bilateral talks are under way according to an old tradition.

He also noted that cooperation between Russia and Iran in the field of military arms and the capacities of the two countries remain a high priority in the negotiations.

For his part, the top Iranian general praised Russia and its President Vladimir Putin for backing Iran’s membership in the Shanghai Cooperation Organization.

Hailing the enhancement of cooperation between Iran and Russia, Major General Baqeri said, “The military and defense relations have grown remarkably in recent years, and we hope that the growing course of cooperation would continue.”

He also highlighted Tehran and Moscow’s resolve to fight against terrorism, saying the two states have seriously pursued plans to counter international terrorism in the past 10 years, especially in Syria and Iraq.

Iran and Russia have two joint economic commissions and will proceed with cooperation within that framework, the Iranian general added.

In August, President of Iran Ebrahim Raisi described efforts to enhance and strengthen relations with Russia as a top priority in his administration’s foreign policy, assuring his Russian counterpart of Tehran’s serious resolve to finalize a comprehensive cooperation deal with Moscow.