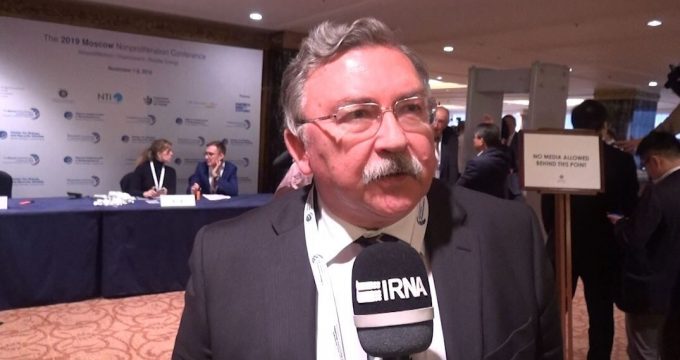 The Russian ambassador to international organizations in Vienna says his country believes, unlike the European Union, there are no reasons to be pessimistic about the fate of the 2015 Iran nuclear agreement, whose revival depends on a removal of all anti-Iran sanctions.

Mikhail Ulyanov made the remarks in response to an earlier tweet by European External Action Service (EEAS) Deputy Secretary General Enrique Mora, who is slated to visit Tehran on Thursday to discuss the resumption of the Vienna talks, almost four months after they were paused due to Iran’s change of administration and Washington’s failure to remove all the sanctions.

“Travelling to Tehran where I will meet my counterpart at a critical point in time,” Mora tweeted on Wednesday. “As coordinator of the JCPOA, I will raise the urgency to resume #JCPOA negotiations in Vienna. Crucial to pick up talks from where we left last June to continue diplomatic work.

Ulyanov pointed out that the approaches of Russia and the EU almost fully coincide regarding the issue, adding, “The slight difference is that in our view there are no reasons for pessimism with regard to #JCPOA. The #ViennaTalks will resume soon. No doubt about it.”

This is a rare occasion nowadays when the approaches of #Russia and #EU practically fully coincide. The slight difference is that in our view there are no reasons for pessimism with regard to #JCPOA. The #ViennaTalks will resume soon. No doubt about it. https://t.co/FZlCYc4HJF

The nuclear deal, officially referred to as the Joint Comprehensive Plan of Action (JCPOA), was nixed by the former US administration of Donald Trump, who replaced the deal with a so-called maximum pressure campaign against Tehran.

Although the Joe Biden administration has voiced willingness to rejoin the JCPOA, Tehran says it has retained the Trump administration’s maximum pressure policy, which included draconian sanctions targeting Iran’s economy.