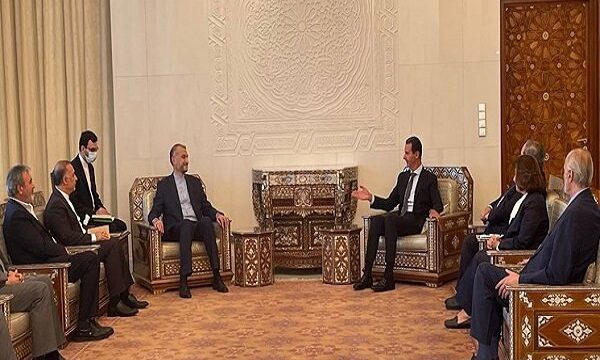 Syrian President Bashar al-Assad says the United States’ withdrawal from Afghanistan shows the decline and collapse of Western powers, criticizing the US for refusing to shoulder responsibility for its actions in Afghanistan.

In a meeting with visiting Iranian Foreign Minister Hossein Amir-Abdollahian in Damascus on Saturday, the Syrian president said regional countries and Afghanistan’s neighbors know that the US refrains from shouldering responsibility for its actions and policies in the war-torn country.

He added that Iran has the capacity and needs to enter into negotiations with its neighbors and other key players in order to help the current developments in the crisis-hit country culminate in success because the Americans seek to pit Afghanistan’s neighboring states against each other.

The US invaded Afghanistan in October 2001 following the September 11, 2001 attacks. American forces occupied the country for about two decades under the pretext of fighting against the Taliban. But as the US forces left Afghanistan, the Taliban stormed into Kabul, weakened by continued foreign occupation.

The Taliban wrested control of Afghanistan in August after a fierce offensive facilitated by a flash withdrawal of all of the United States’ forces from the country that had been announced by Washington back in April.

The government of Afghanistan rapidly collapsed on August 15, with President Ashraf Ghani fleeing the country in the face of lightning advances of the Taliban.