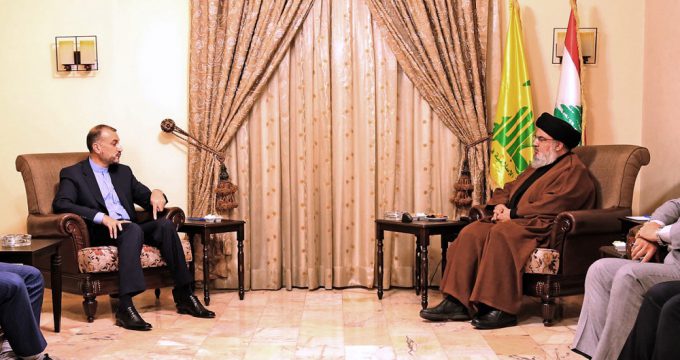 Secretary General of Lebanon’s Hezbollah Resistance Movement Sayyed Hassan Nasrallah told Iran’s Foreign Minister Hossein Amirabdollahian that the Islamic Republic of Iran has proved to be a sincere ally and loyal friend for the Lebanese nation.

According to the Lebanese media, Nasrallah has Amirabdollahian and his entourage in Beirut, Lebanon.

Mohammad-Jalal Firouznia, Iran’s ambassador to Beirut, too, took part in the meeting during which the Lebanese and Iranian sides discussed the latest developments in Lebanon and the region.

Iran’s foreign minister underlined that Tehran has a firm stance when it comes to supporting Lebanon and the resistance movement.

Nasrallah, for his part, thanked the Islamic Republic of Iran for standing with the Lebanese government, nation and resistance for several decades.

Iran has proved that it is a sincere ally and a loyal friend, which will not abandon its friends even in difficult times,” Nasrallah said.