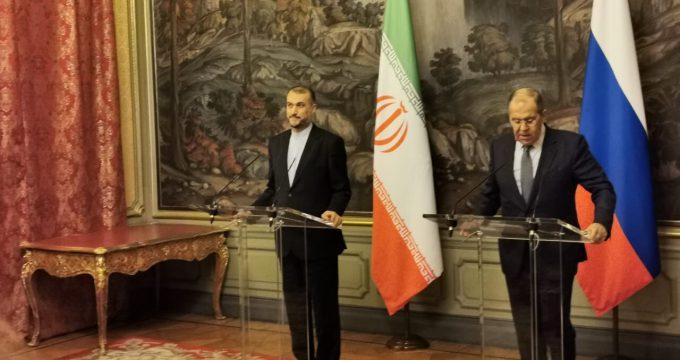 Iran-Russia trade rallies by 42% despite US sanctions on Tehran: Lavrov

Russian Foreign Minister Sergei Lavrov said on Wednesday that the volume of trade between Iran and Russia has increased by 42% despite the US sanctions on Tehran.

Lavrov made the remarks during a joint press conference with his Iranian counterpart Hossein Amirabdollahian after a meeting earlier in the day.

He said that his Iranian counterpart has expressed Tehran’s readiness for the resumption of the nuclear talks with the G4+1, noting that Iran will soon decide about the time of negotiations.

The JCPOA issue has to be solved through UNSC Resolution 2231, Lavrov said, adding that Moscow will not accept the US and the West imposing their viewpoints on others.

The Russian foreign minister said that he and Amirabdollahian also discussed trade relations and the production of the Russian Sputnik-V vaccine.

Russia will continue with negotiations with Iran and Turkey within the framework of Astana talks, he said.

Lavrov said that the two countries are considering negotiations within a 3+3 framework between three Caucuses countries of Azerbaijan, Armenia, and Georgia on the one hand and Iran, Russia, and Turkey on the other hand.

He stressed that Russia has no desire to change the geopolitics of the region.

The Russian foreign minister also said that he and his Iranian counterpart agreed on a meeting between the presidents of the two countries.