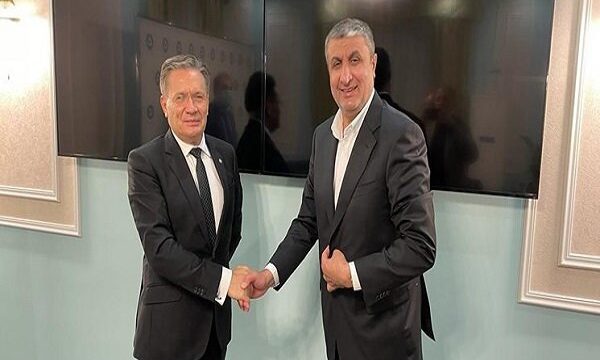 Head of Atomic Energy Organization of Iran (AEOI) Mohammad Eslami and the Head of Rosatom Alexey Likhachev stressed the need to strengthen and develop peaceful nuclear cooperation between Iran and Russia.

During a meeting held on Tuesday in Moscow, the two sides discussed strengthening and developing cooperation in the peaceful nuclear energy field.

Emphasizing that Iran and Russia have strategic relations and cooperation on various issues, the two sides stated that they will do their best to pursue cooperation between the two countries on peaceful nuclear energy at a faster pace.

Referring to the deep and strategic relations between Iran and Russia in various bilateral and international arenas, Eslami said, “Cooperation between the two countries in the field of peaceful nuclear activities, including the construction and development of nuclear power plants, proceeds well, and this cooperation must further be expanded to a greater level than ever before.”

He also expressed hope that the two countries would strengthen and accelerate the process of cooperation through these talks.

Alexey Likhachev, for his part, welcomed further deepening of mutual cooperation in the peaceful nuclear field.

Head of Atomic Energy Organization of Iran (AEOI) Mohammad Eslami arrived in the Russian capital of Moscow on Tuesday to discuss bilateral ties and issues of mutual interests.