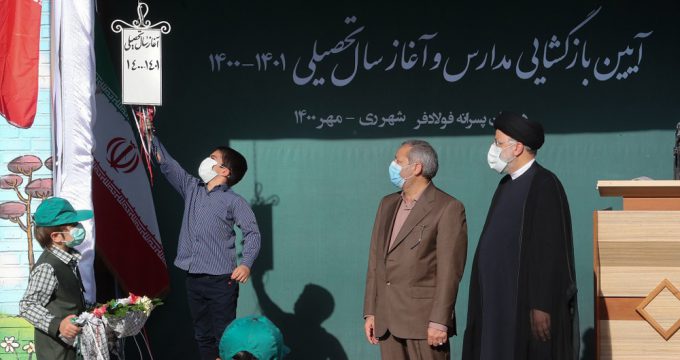 Pres. Raisi stresses education for all as Iran rings in new school year

Some 15 million students have started the new school year in Iran, where President Ebrahim Raisi stressed that no one should be left behind in having access to education because of poverty.

Raisi attended a ceremony on Saturday at Fooladfar elementary school in Shahr-e-Rey to Tehran’s south, where the son of Martyr Mohammad-Hadi Narimani rang the bell marking the beginning of the new school year.

Due to the outbreak of the coronavirus, Iranian students will mostly shift to home-based learning until new directives are issued.

During his speech, Raisi underscored the primacy of educational equality, saying, “No one must be deprived of education due to poverty.”

Marking the 41st anniversary of the 8-year war, which was waged on Iran by former Iraqi dictator Saddam Hussein, the president commemorated those who made great sacrifices during the course of the war.

Raisi also commemorated Ali Landi, the Iranian teenager who became a national hero after rescuing two women from fire. He passed away on Friday due to severe burns.