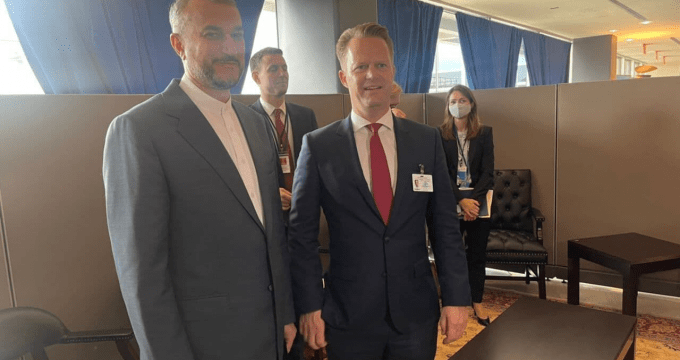 The Iranian foreign minister in continuation of his meetings with foreign ministers and senior officials of other countries on the sidelines of 76th conference of the UN General Assembly met and held talks with his Danish counterpart.

During the meeting, the two sides reviewed the latest situation of regional developments.

Earlier on Thursday,Amirabdollahian and his Kyrgyz counterpart Ruslan Kazakbayev discussed bilateral relations, especially trade and economic cooperation, at a meeting on the sidelines of the UN General Assembly in New York on Thursday.

During the meeting, the Kyrgyz foreign minister congratulated Amirabdollahian on his appointment as Iran’s top diplomat and proposed a direct flight between Bishkek and Tehran. Kazakbaev also expressed willingness to use the Iranian port city of Bandar Abbas’s capacity for transit cooperation.