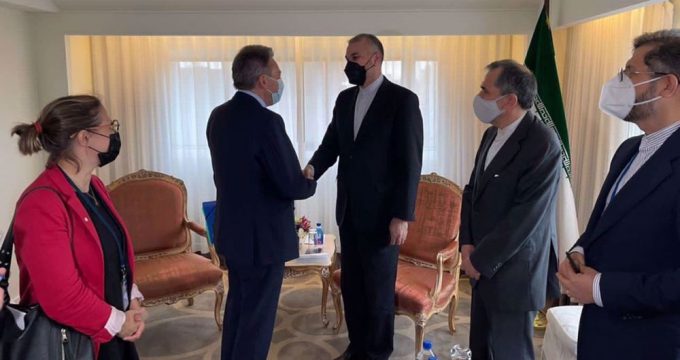 Foreign Minister Hossein Amir-Abdollahian has criticized the international community for inaction in the face of oppressive US sanctions against the Iranian people, calling for concerted efforts to counter the inhumane measures.

“The oppressive US sanctions are an inhumane act and a blatant form of terrorism against the Iranian people that must be rejected and countered by all,” Amir-Abdollahian said in a meeting with the president of the International Committee of the Red Cross (ICRC), Peter Maurer, in New York on Wednesday on the sidelines of the 76th session of the UN General Assembly.

In May 2018, former US President Donald Trump unilaterally withdrew from a UN-endorsed nuclear deal, which it had signed as a member of the P5+1 group with Tehran in 2015, and unleashed a “maximum pressure” campaign against Iran.

In response, Iran announced remedial measures, scaling back some of its commitments under the deal, while maintaining that the moves were “reversible” depending on the actions of the other signatories.

The US special envoy for Iran, Robert Malley, has admitted that the maximum pressure campaign against the Islamic Republic has “failed miserably” and “hurt US interests.”

“In the midst of the coronavirus pandemic and despite all pressures that Iranian society is facing these days, we tried to vaccinate the displaced Afghans as much as possible, but immediate and serious international assistance is needed in this regard,” the top Iranian diplomat said.

The government of Afghanistan collapsed on August 15 and president Ashraf Ghani fled the country in the face of the lightning advances by the Taliban following a hasty and ill-executed withdrawal of foreign forces from the country. Fears of violence and poverty have caused many Afghans to seek refuge in neighboring countries and elsewhere.

The ICRC president hailed Iran’s close cooperation with the committee and its valuable efforts to host the Afghan refugees.

Maurer also stressed the importance of improving health infrastructure in Afghanistan and said humanitarian activities in the war-hit country should not be limited only to the dispatch of commodities.

In a meeting with his Venezuelan counterpart Felix Plasencia, the Iranian foreign minister said the two countries would continue joint efforts to counter the US sanctions, emphasizing resistance and a focus on domestic capacities.