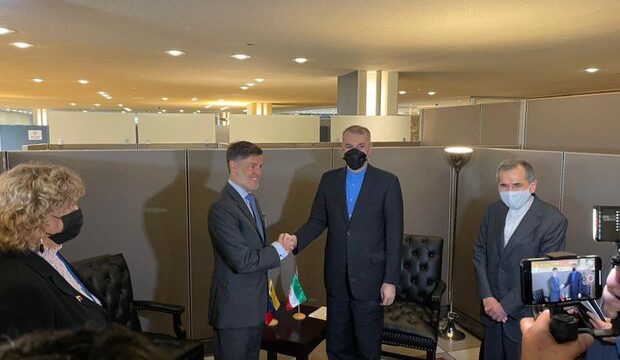 Iran’s Foreign Minister Hossein Amir-Abdollahian and his Venezuelan counterpart Felix Plasencia have held talks over relations between the two countries on the sidelines of the UN General Assembly meeting.

According to the official website of the Iranian Foreign Ministry in the meeting that happened on Wednesday, the two foreign ministers emphasized the strong and close relationship between Iran and Venezuela

The Venezuelan foreign minister presented a report on the situation in his country and thanked the Islamic Republic of Iran for its cooperation and assistance to Venezuela. Pelasencia said Venezuela’s economy is on track to recovery.

He added that Caracas is carefully and meticulously following relations with Iran and will use all capacities to cooperate and boost relations with the Islamic Republic.

He also called for the expansion of economic and trade relations with the Islamic Republic of Iran.