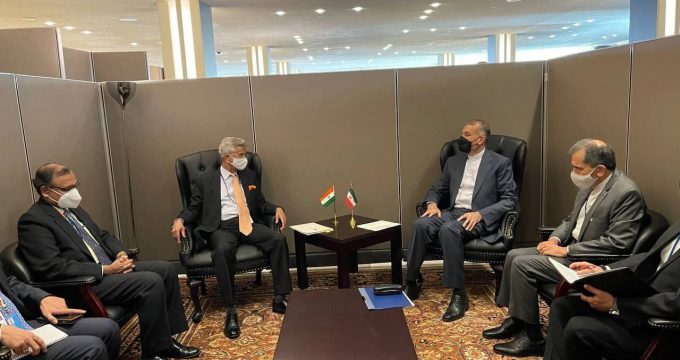 Ministers of foreign affairs of Iran and India in a meeting in New York on Tuesday sought ways for expansion of bilateral economic ties and finalizing negotiations for provision of Corona vaccines.

Hossein Amirabdollahian’s first bilateral meetings on the sidelines of the 76th UN General Assembly was with Subrahmanyam Jaishankar, the foreign minister of India, according to the Iranian Foreign Ministry Public Relations.

In the meeting the two sides surveyed the existing level of bilateral ties and exchanged viewpoints in regional and international developments.

They also stressed the need for having broader consultations, a higher level of economic ties, and finalizing negotiations on provision of vaccines.

The two foreign ministers focusing on the latest status of Afghanistan, said that it is necessary to establish an all-encompassing government inclusive of representatives of the entire Afghan tribes and ethnic groups, and refraining from foreign interference.

Amirabdollahian in the meeting while announcing Iran’s readiness for improving the level of cooperation and holding shared consular and economic commissions, emphasized that an agreement on preferential trade in the field of energy needs to be finalized between Iran and India.