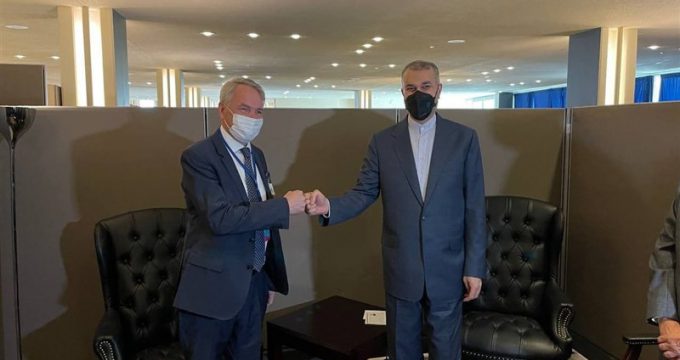 The foreign minister of Iran expressed the country’s readiness to promote economic and trade cooperation with Finland and start direct flights between Tehran and Helsinki.

Hossein Amirabdollahian held a meeting with his Finnish counterpart Pekka Haavisto on the sidelines of the 76th session of the UN General Assembly in New York on Tuesday.

The two foreign ministers discussed issues of mutual interest between Iran and Finland and the latest developments in Afghanistan and the wider region.

Voicing the Iranian administration’s willingness to pursue relations with Finland more diligently, Amirabdollahian said holding the Iran-Finland political committee can give an impetus to the bilateral ties.

Amirabdollahian noted that Iran is quite ready to expand economic, trade, industrial and agricultural ties with Finland and to establish direct flights between Tehran and Helsinki, the Foreign Ministry’s website reported.

He also underlined the need to support the activity of the private sectors of Iran and Finland.

For his part, Haavisto reviewed the ties with Iran, including the political, economic and environmental relations.