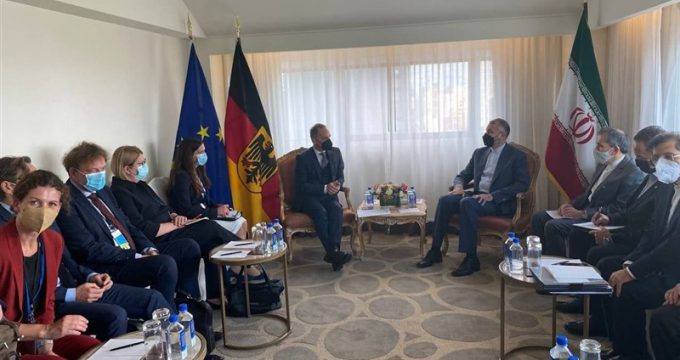 In a Tuesday meeting with Mass on the sidelines of the 76th session of the UN General Assembly in New York, Amirabdollahian said Iran expects that the economic benefits of the JCPOA, which have not been materialized due to the negligence of the other parties, will be guaranteed this time.

The Vienna talks are not aimed at reaching a new agreement, but to ensure the full and guaranteed return of the United States to its obligations under the UN Security Council Resolution 2231, he added.

“Unfortunately, what we see in the policies of the incumbent US administration is the continuation of the Trump administration’s approach with regard to imposing illegal sanctions,” Amirabdollahian deplored.

The new Iranian government would not tie the domestic economy to the JCPOA, he added, expressing Tehran’s readiness to design relations independent of the 2015 nuclear deal.

The economic relations between Iran and Germany are not satisfactory at all, and it is necessary to find a way to improve the situation, Amirabdollahian stated, according to the Iranian government’s official website.

For his part, Maas said Germany is committed to the JCPOA and is making every effort to preserve and revive the deal.