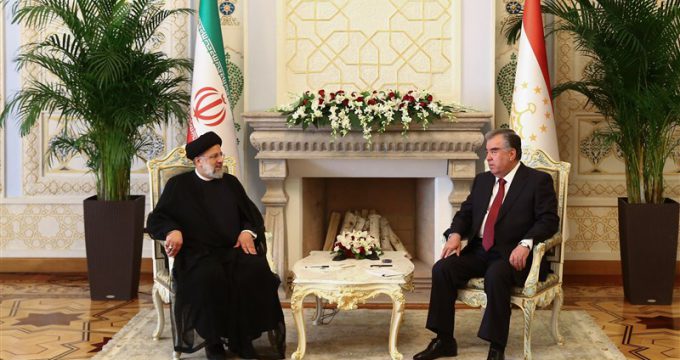 The presidents of Iran and Tajikistan weighed plans for the start of a new chapter in growing relations between the two countries coupled with close cooperation in various fields.

In the gathering, held on the sidelines of the 21st SCO summit, they highlighted the common religion, culture and language of the two nations, expressing hope that the efforts by the officials of the two countries would mark a new chapter in the promotion of bilateral relations and cooperation in the economic, cultural and political fields.

Pointing to the capacities of Iran and Tajikistan for the expansion of cooperation, the Iranian president said, “The deepening and strengthening of bilateral interaction and relations will prepare the ground for the promotion of regional cooperation between the two countries as well.”

President Raisi also urged that the Iranian and Tajik authorities should maintain regular meetings and bilateral negotiations in order to found sustainable and inclusive relations between the two Persian-speaking nations in such a way that the ties would turn into a regional model.

For his part, President Rahmon thanked Raisi for attending the SCO summit and for making his first official visit as the president of Iran to Tajikistan.