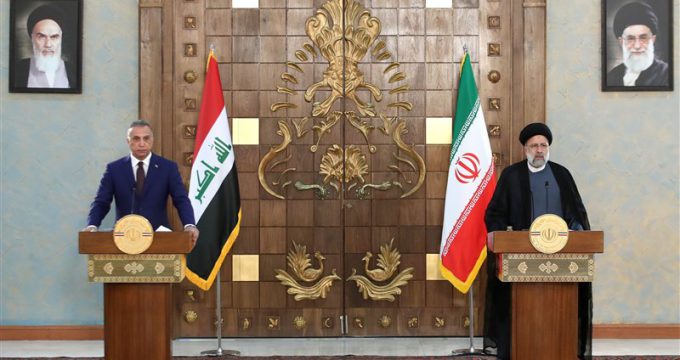 “We are very pleased with the presence of the high-ranking delegation of the friendly and brotherly country of Iraq in our country and thank God, the relations between the two countries in the political, economic and cultural fields are very good, but they can be further developed,” said Iranian President Ebrahim Raeisi in his press conference with Iraqi Prime Minister Mustafa al-Kadhimi on Sunday.

He also added that the two sides emphasized the will to develop Iran-Iraq relations during the meeting.

“Iran-Iraq relations can increase despite the wishes of the enemies,” he noted.

Stating that the role of the two countries in the region, the world and international relations can affect Iran-Iraq relations, the President said, “What was discussed in the specialized meetings between the honorable ministers, as well as in the meeting between me and the Prime Minister of Iraq is all for the development of relations. Some decisions were made in these meetings which we hope will be implemented soon.”

“Visa waiver for citizens of both countries was Mr. Prime Minister’s good news,” he added, saying, “The will of Iran and Iraq to develop the railway corridor and accelerate the construction of the Shalamcheh-Basra railway is also a good step that we hope will be done quickly with his order and the follow-up of the relevant ministers.”