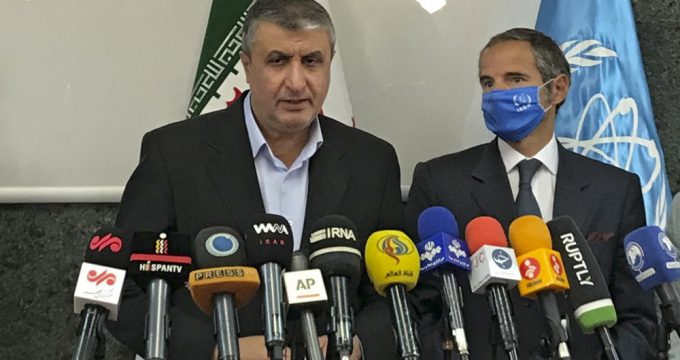 Following his meeting with the IAEA chief in Tehran, Head of the Atomic Energy Organization of Iran (AEOI) Mohammad Eslami called the negotiations ‘constructive’.

The meeting between the Director-General of the International Atomic Energy Agency and the President of the Atomic Energy Organization of Iran finished and the two sides issued a joint statement after the meeting.

After the meeting, Mohammad Eslami told reporters, “We had constructive negotiations. There are essentially technical issues between the two sides. We agreed to participate in the next summit and to continue our negotiations on the sidelines of the summit.”

“The Director-General of the Agency is scheduled to travel to Tehran in the near future to hold talks with the authorities on replacement of the memory cards of the cameras,” he added.

“The mutual trust between Iran and the IAEA is of importance for us,” Eslami said.

Grossi, for his part, said, “This visit is very important for me as it took place after the new government takes office. This means that Iran and the IAEA must work together and expand their cooperation.”