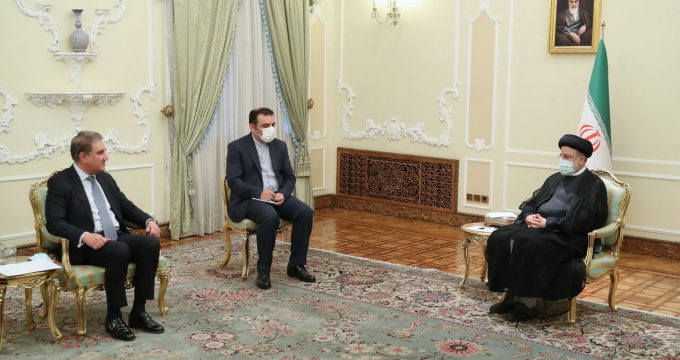 President Ebrahim Raisi described relations between Tehran and Islamabad as very old, religious and based on public interests and believed ties between the two neighboring countries should further expand.

He made the remarks here Thursday in a meeting with the visiting Pakistani Foreign Minister Shah Mahmood Qureshi when he stressed that fostering bilateral relations can pave the way for the development and consolidation of regional and international cooperation between Iran and Pakistan.

The Iranian President went on to refer to the US withdrawal from Afghanistan as a starting point for all Afghan ethnic groups to initiate interactions to establish peace, security and stability in their country.

He highlighted the fact that the US presence in Afghanistan and the region was not for the sake of its security so now all regional countries should help Afghanistan to form an inclusive and participatory government.

He also rejected any “guardianship” views about administration of Afghanistan as a failed model engineered by the United States which lacked the capacity to create lasting peace and stability in Afghanistan.

The President stressed that other countries, including Afghanistan’s neighbors, should only facilitate the establishment of an inclusive and participatory government with the presence of all Afghan ethnic and political groups.

Raisi said foreign countries like the US never acted as security-builders but even emerged as sources of problems so regional countries, especially Iran and Pakistan, can work together to facilitate the interaction among Afghan ethnic and political groups to create security and peace in the country.

The Pakistani Foreign Minister too described the Iran-Pakistan relations as historic and deep and said that Pakistan seeks to deepen and strengthen relations between the two countries on many regional and international issues and in various economic, political and regional fields.

He voiced his country’s determination to further improve the level of Tehran-Islamabad relations.