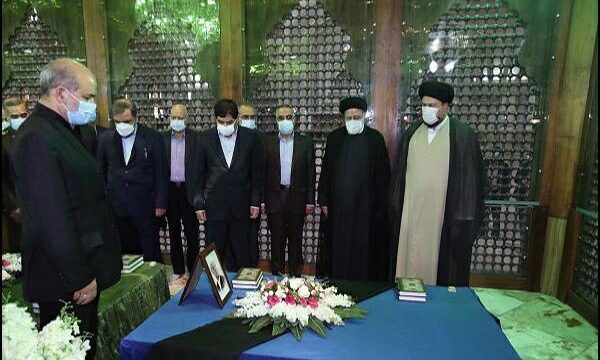 Only one day after almost all of his proposed ministers were approved by the parliament, Raisi and his cabinet members attended the mausoleum of Imam Khomeini in south Tehran, pledging allegiance to the ideals of Imam Khomeini and martyrs of the Islamic Revolution.

The ceremony was also attended by Hassan Khomeini, grandson of Imam Khomeini. They paid tribute to the Founder of the Islamic Republic.

The ceremony, practiced traditionally by Iranian administrations on the first day of the formation of their cabinet, marks the practical start of the administration’s work.

In a speech before the tomb of Imam Khomeini, Raisi highlighted the role of the people in Imam Khomeini’s political thought which was different than the way typical politician talk about people.
He said that his administration wanted the whole political spectrum and all people in Iran to feel that the administration is standing beside them, fulfilling its tasks regarding all individuals no matter what their thought or political taste is.