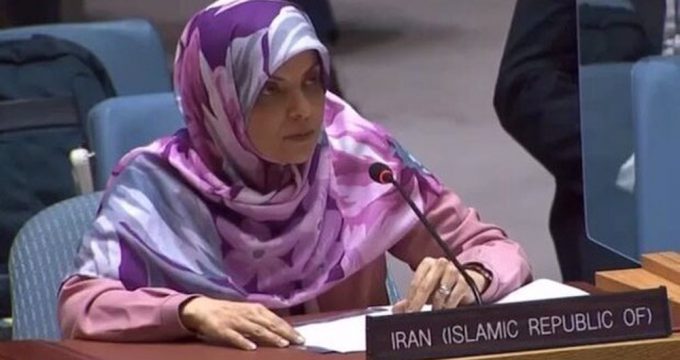 Iran’s deputy ambassador to the United Nations stressed that all uninvited foreign forces must leave Syria without any precondition and delay in order to create conducive grounds for ending the conflict in the Arab country.

Ambassador and Deputy Permanent Representative of Iran to the United Nations, Zahra Ershadi, delivered a speech to a meeting of the United Nations Security Council on “The situation in the Middle East (Syria – Political and Humanitarian)” on Tuesday.

In her address, the Iranian envoy called for the immediate withdrawal of uninvited foreign troops from Syria, confrontation with the terrorist groups, an end to the sanctions against Syria, and the UN’s action to force the Israeli regime to end its aggressions against sovereignty and territorial integrity of Syria.

The following is the text of her speech, released by IRNA:

“We recall resolution 2585 through which the Security Council has called upon all Member States to respond with practical steps to address the urgent needs of the Syrian people.

It is essential that the Council has also recognized that humanitarian activities are broader than solely addressing the immediate needs of the affected population and should include support to essential services through water, sanitation, health, education, and shelter early recovery projects.

Given that the imposition of unlawful unilateral sanctions against Syria by certain countries is one of the major causes of the current humanitarian situation in that country, the Council, by using the term ‘practical steps’, is literally calling, though implicitly, for the removal of such sanctions, at least in areas related to ‘early recovery projects’.

Yet, this call must not be misconstrued as if sanctions imposed on other sectors are acceptable or assisting Syria in other areas particularly reconstruction efforts are less important.

As resolution 2585 is the result of a compromise, including by main countries imposing such sanctions, we urge them to honor their promises, take their obligations under that resolution seriously, and remove, immediately and fully, all unlawful sanctions against Syria.

In a situation that has been described by the Council as a ‘complex humanitarian emergency’, removing unilateral sanctions are essential also due to the fact that sanctions seriously undermine the efficiency of humanitarian operations in Syria conducted by the United Nations and international non-governmental organizations.

As most of the humanitarian operations are carried out from inside Syria, in line with the call by resolution 2585, cross-line humanitarian assistance must be improved. This can be done including through a substantial increase in allocated assistance and ensuring that they are commensurate with the size of population living in areas covered by such operations.

Likewise, we positively note requesting the Secretary-General to provide a report containing detailed information on the cross-border operations, including the distribution mechanism, operating partners, and the volume and nature of items delivered.

This must lead to addressing one of the missing points in cross-border humanitarian assistance, namely the lack of transparency.

In any case, cross-border mechanism must be used in full accordance with the United Nations guiding principles of humanitarian emergency assistance and it must be guaranteed that this mechanism is not used, directly or indirectly, for lending any support to terrorist groups inside Syria.

The full, effective and good-faith implementation of resolution 2585, beyond addressing the urgent humanitarian needs of the Syrian people, can have positive implications on other areas, leading to depoliticization of humanitarian assistance and creating certain level of trust and confidence, which is required for further cooperation towards peaceful settlement of this crisis.

In this context, we reiterate our principled position that the Syrian crisis must be settled peacefully and in accordance with principles of international law, particularly respect for the sovereignty and territorial integrity of States, non-intervention and non-interference in their internal or external affairs and peaceful settlement of international disputes.

To create conducive grounds for ending the conflict in Syria, all uninvited foreign forces must leave that country without any precondition and delay, and terrorist groups must be confronted.

Equally important, the Council must compel the Israeli regime to put an immediate end to its aggressions against sovereignty and territorial integrity of Syria. Such adventuristic practices constitute flagrant violations of international law, threatening regional and international peace and security.

Along with other members of the Astana format, we support the Constitutional Committee’s work which must continue according to its rules of procedure and without foreign interference or externally imposed timelines. We hope the Committee’s next meeting will commence soon.

Committed to the restoration of the unity and territorial integrity of Syria, we will continue our efforts in assisting the people and Government of Syria to overcome the enormous challenges they face.”