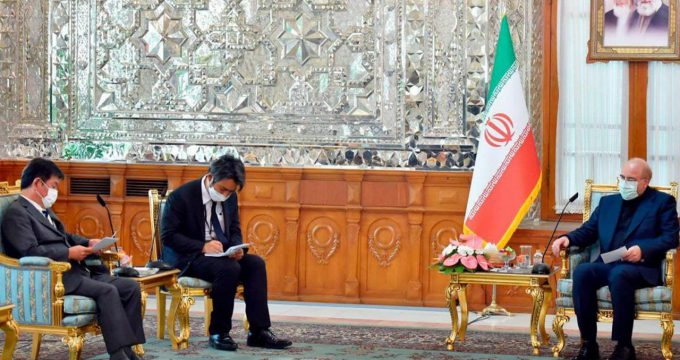 He made the remarks here on Sunday in a meeting with the visiting Japanese Foreign Minister Toshimitsu Motegi.

The speaker thanked the Foreign Ministry and the Government of Japan for donating doses of COVID-19 vaccine to Iran and believed the parliaments of both countries are duty-bound to promote political, economic and cultural relations.

He said Iran and Japan should try to define relations based on a long-term roadmap and hoped mutual cooperation in such areas humanitarian activities and environmental, health and natural disaster issues will further expand.

Pointing to the US unilateral withdrawal from the Joint Comprehensive Plan of Action (JCPOA), Qalibaf termed it as a violation of all multilateral and international norms which led to imposition of illegal sanctions on the Iranian nation and government.

He stressed that Iran expected the Japanese government to take serious steps to free Iranian assets, especially in this time of COVID-19 outbreak.

The speaker further highlighted Iran’s full commitment to the United Nations Security Council decisions and said Americans, too, have to undertake their obligations.

Qalibaf further noted the US sabotage has even hindered Iran’s purchase of COVID-19 medicine and said Japan as a peace-loving country has to take serious action in this regard.

Turning to regional issues, he said Iran, like Japan, believed stability and peace in the region could be realized only when regional countries themselves move to solve problems in the region including in Syria, Yemen and Afghanistan.

The Japanese Foreign Minister, too,said Japan’s parliament was interested in developing and expanding interactions with the Iranian parliament and hoped webinars will be held in coming days between the heads of the parliamentary friendship groups of the two sides.

He also said that the donation of COVID-19 vaccines to the Iranian people is a token of the friendly relations between Iran and Japan.”

Toshimitsu Motegi further referred to Japan’s support for Iran in face US-imposed sanctions and referring to the need to further strengthen trade and economic cooperation between Iran and Japan, voiced his interest in promoting dialogue between the two countries on economic issues.