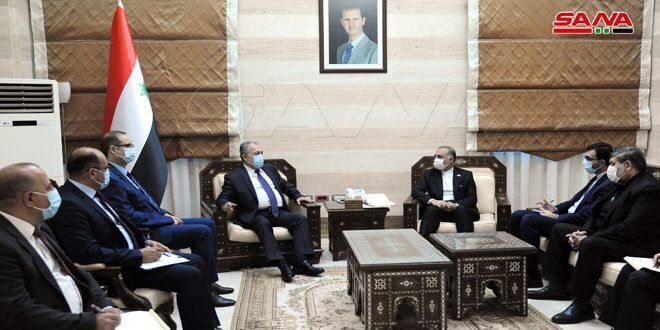 Mahdi Sobhani, Iran’s ambassador to Damascus, on Sunday evening in a meeting with Hossein Arnus, the Syrian prime minister, was agreed with him on need for finding ways for broader bilateral comprehensive cooperation, as well as implementing joint projects.

In the meeting the two sides talked on the implementation of the reached bilateral agreements and joint projects.

The two sides also emphasized the importance of increasing the level of cooperation and joint efforts in industrial, energy, investments, commerce, ports and shipping, communications, agricultural, medical and other appropriate fields for joint cooperation, the elimination of obstacles in the way of implementing the joint projects, and expediting their implementation.

Arnus and Sobhani in the meeting meanwhile surveyed the joint projects that are in the process of completion that can contribute to boosting production in Syria and provision of the raw materials and the other needed articles in Syrian markets, as well as reconstruction of a number of Syrian factories.

The Syrian prime minister emphasized the great significance of cooperation in increasing the number of joint projects and opening news horizons for bilateral cooperation between the two friend countries at all levels, announcing the readiness of Damascus for presenting the entire needed facilities for implementing the vital joint projects and further development them in a way to contribute to creating more job opportunities in Syria, and development of the Syrian economy.

He appreciated the Iranian Supreme Leader, as well as the government and people of the Islamic Republic of Iran for standing side by side of the Syrian people in their camping against terrorism.

Sobhani, too, in this meeting said that Iran will continue its support for the Syrian people to encounter the unjustly imposed sanctions against Damascus, as well as contributing to the reconstruction process of Syria.

He emphasized the need and importance of spending full efforts aimed at improving bilateral ties and cooperation in order to proceed with the unfinished joint projects, in line with both countries national interests.