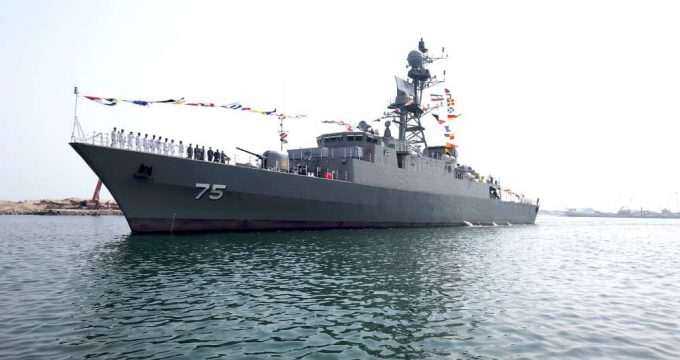 Homegrown ‘Dena’ Destroyer will soon join the Third Naval Zone of Navy Force of the Islamic Republic of Iran in order to increase naval capacity of Iran Army Navy’s fleet.

Rear Admiral Hossein Khanzadi Commander of Iran Army Navy made the remarks on Tuesday while paying visit to southern bases of the force.

Turning to the significance of developing maritime civilization under the shadow of sustainable security and construction of completely indigenous vessel, he said that presence of strategic naval fleets of Iran Army in international waters, in addition to hoisting the sacred flag of the Islamic Republic of Iran and ensuring security of sea lines in order to protect Iran’s interests, shows a manifestation of country’s authority and pride in international arenas.

The Commander emphasized the need to strengthen trans-regional presence of the Islamic Republic of Iran in international waters and stated that homegrown ‘Dena’ Destroyer, which was manufactured by expert domestic engineers, will soon join the Third Naval Zone of Iran Army Navy, stationed in Konarak, in line with increasing the capacity of Iran’s Army Naval fleet.

The capability of Iran Army Navy Force is constantly increasing in all areas to pave suitable ways for next generation of Iranian seafarers to be able to carry out their assigned missions more easily and take an important step towards the development of maritime civilization with the motto of peace and friendship, Commander of Iran Army Navy Force Rear Admiral Khanzadi added.