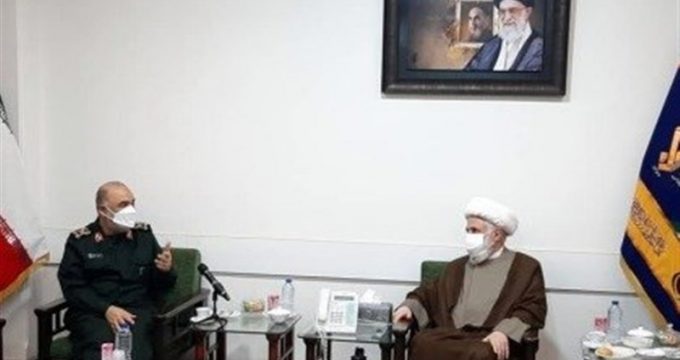 Commander of the Islamic Revolution Guards Corps Major General Hossein Salami has praised Lebanese Hezbollah for its role in bringing dignity and protecting the security of Lebanon.

Major General Hossein Salami made the remarks in a meeting with the Lebanese Hezbollah Deputy Secretary-General Sheikh Naim Qassem in Tehran on Saturday afternoon, during which the IRGC Commander-in-Chief praised the vigilance and strength of the Lebanese Islamic Resistance, calling Hezbollah a dignified power and a guarantor of the security of Lebanon.

“Due to the fact that Hezbollah was born and raised in an environment of Resistance, the Zionist enemy understands well the scope and depth of its power,” Gen. Salami said in the meeting.

The IRGC chief added while the strength of Hezbollah is increasing, the enemy’s power is in decline.

He said that the Zionist enemy knows very well that if they engage in a fight with Hezbollah they will have to flee as nowhere in occupied lands would be safe for them.

“This situation will lead to the collapse of the Zionist regime, which is not a difficult task,” the IRGC chief said.

He also noted that the necessary ground is prepared for toppling the Zionist regime.

Sheikh Naim Qassem, for his part, thanked Iran’s supports, especially those of the IRGC, for the Islamic Resistance in Lebanon, saying that Lebanese Hezbollah owes too much to Iran.

He further said that Hezbollah’s popularity in Lebanon has concerned and frustrated the enemies.

August 8, 2021
Cause of instability, insecurity must be expelled from region: Advisor
Iran FM urges int’l community to support political solution to Afghanistan’s crisis