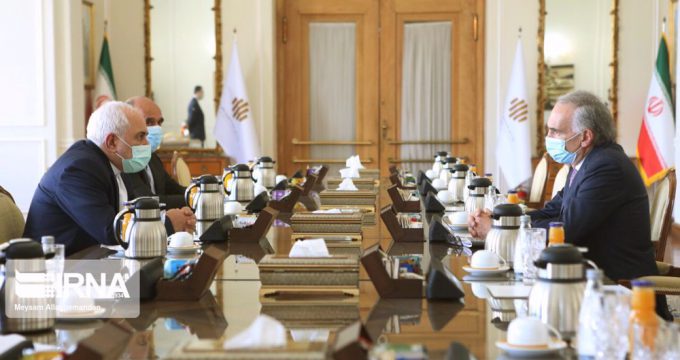 Iranian Minister of Foreign Affairs Mohammad Javad Zarif said on Sunday that the international community should take a clear stance in support of a political solution to the crisis in Afghanistan.

Zarif made the remarks during a meeting in Tehran with the United Nation’s Special Envoy on Afghanistan Jean Arnaud.

The foreign minister also called on the international community to condemn violence and its consequences.

He referred to the exacerbating situation in Afghanistan, saying, the wrong policies taken by foreign powers are one of the main factors contributing to the current situation in the country.

Reiterating Iran’s readiness for facilitating the negotiations between various sides in Afghanistan to help restore peace in the country, the foreign minister said that intra-Afghan talks are the only solution to the crisis in Afghanistan.

The UN envoy, for his part, reiterated the role of Islamic Republic of Iran and other regional countries in helping peace process in Afghanistan.

No single country or a limited group of countries would be able to alleviate the current situation in Afghanistan, Arnaud said, underlining the necessity of collective efforts to help improve the dire situation in the country.

He stressed that intra-Afghan talks are the only solution to the Afghan crisis.