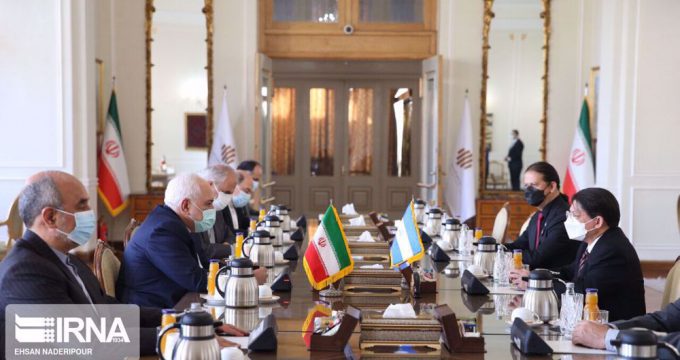 Iran and Nicaragua have hailed their common struggle against the US which has imposed sanctions on both countries, and pledged to expand their mutual cooperation.

Zarif described relations between the two nations in a variety of fields as significant and called for employment of appropriate measures to expand bilateral cooperation.

The top Iranian diplomat highlighted the identical experiences of both nations in resisting brutal economic pressures imposed through unilateral US policies and hailed their people in overcoming them.

Colindres, for his part, expressed pleasure for taking part in the presidential inauguration in Tehran and thanked outgoing Zarif for his efforts to develop relations between the two countries in the past eight years.

The development came as the US State Department announced on Friday new restrictions on 50 immediate family members of Nicaraguan officials with close ties to the country’s president and top leader of its 1979 revolution, Daniel Ortega.

The officials include lawmakers, prosecutors and judges. Nicaragua is due to hold national elections in November. Ortega is seeking a fourth consecutive term.

In yet another instance of typical meddling in other countries’ internal affairs, US officials claimed that Nicaragua’s electoral council had barred an anti-government conservative coalition from running in the Nov. 7 elections.

The State Department announcement of visa sanctions Friday follows similar measures taken against 100 other officials on July 12. The US claimed they were “believed to be responsible for, or complicit in, undermining democracy, including those with responsibility for, or complicity in, the suppression of peaceful protests or abuse of human rights, and the immediate family members of such persons.”

The Nicaraguan government did not immediately comment on the new restrictions. In the past, Ortega has maintained that widespread protests that began in April 2018 were an attempted coup with foreign backing.